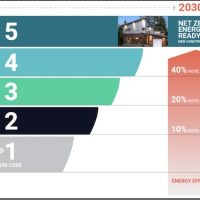 “These new codes are more reflective of the current world we live in,” Kevin Griffiths, chair of the NRC’s Canadian Commission on Building and Fire Codes (CCBFC), said in a release. But while the technically-worded announcement mentions accessibility considerations and new coverage of large farm buildings ahead of energy performance, Efficiency Canada took more of a plain-language victory lap, pointing to a new set of National Model Codes that take their cue from British Columbia’s voluntary Energy Step Code first introduced in 2017.

“This version of the code is not simply a minimum standard,” the organization said in a backgrounder released Monday. “It is a pathway to make all new buildings consistent with national net-zero policy objectives.”

The new code sets out five tiers of energy performance for new buildings, beginning with the building code minimum, Efficiency Canada explains. Tiers 2 through 4 call for efficiency increases of 10, 20, and 40% over the minimum. Tier 5 calls for new construction that is net-zero ready—homes that are built with the ability to produce as much energy as they consume, but with the renewable energy gear like solar panels not yet installed.

With a release date of March 28, the long-awaited standards are still titled the 2020 National Model Codes. The documents “were delayed due to the complexity of the changes, the significant amount of public review feedback on the proposed changes, and the effects of the pandemic,” CCBFC Past Chair Doug Crawford explained in an email. “We’re pleased with how many people were interested in shaping the 2020 codes, and we hope that interest continues as we develop the 2025 National Model Codes.”

But with two years lost on the road to a 2030 target, Efficiency Canada is calling on Ottawa to earmark C$200 million over three years to a new Net-Zero Code Acceleration fund in Finance Minister Chrystia Freeland’s next budget, now due for release April 7. “Every new building that is energy inefficient and uses fossil fuels adds to Canada’s GHG emissions,” the backgrounder states, and federal modelling shows more stringent building codes would reduce the country’s carbon pollution by nine million tonnes by 2030.

“Given the delay in publishing the model code and the promise to speed up adoption by 2025, the federal government has a responsibility to support market readiness in provinces and municipalities,” the backgrounder adds. The acceleration fund would “support activities like studies on costs and compliance, and capacity-building in building trades and municipalities,” and Ottawa “can also create national tools to make complying with the code easier.”

While a big advantage to a tiered code is the opportunity for cities to push beyond provincial minimal standards, only B.C., Quebec, and Newfoundland and Labrador currently allow them to, while Manitoba and Nova Scotia prohibit it. Efficiency Canada Research Manager Kevin Lockhart said municipal action has been an important factor in B.C.’s success on energy-efficient construction.

“Having municipalities act as early adopters and catalysts is something that all provinces and territories should be looking at,” he said. “It helps to signal the direction, not only for that market but for smaller communities.”

But not all provinces are showing a great deal of ambition on net-zero ready housing: Ontario has only committed to Tier 3 of the National Building Code and Tier 1 of the National Energy Code for Buildings, Lockhart said, despite the multiple supporters and beneficiaries of tougher standards.

“As far as industry is concerned, having the province maintain the status quo by adopting Tier 3 and Tier 1 doesn’t give them the signal to ramp up the skills and capacity they’ll need, and it doesn’t give them the certainty and stability of knowing the direction of building code requirements out to 2030,” he said.

“It’s not necessarily more regulation, but clear regulation,” giving companies “the stability and certainty to make investments in their building processes and practices,” Lockhart explained. “It would help the work force, in terms of investing in themselves to be able to construct net-zero ready buildings, and signal manufacturers across the supply chain to invest in high-performance technologies, products, and skills.”

And consumers would come away with safer, more comfortable, low-energy homes that wouldn’t have to be retrofitted in the foreseeable future to deal with volatile or rising home energy costs.

The measures also enjoy wide public support, according to polling by Abacus Data, with 70% of all Canadians, 77% in Quebec and B.C., and 60% in Alberta agreeing their provincial governments should require all new buildings to be highly energy efficient, Efficiency Canada said.