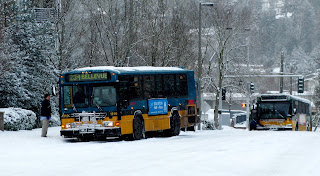 Forecasting snow in western Washington is very difficult, even with modern prediction tools.

Before high-resolution models and satellite observations over the Pacific, it was nearly impossible to accurately predict local snow events and major local snowstorms occurred with little warning (for example, December 18, 1990).

2. Temperatures over the western lowlands are often marginal for snow.  Right on the edge.  So small temperature errors can produce huge changes in snowfall.   Same with small changes in elevation or distance from the warm water.

3.   There are huge local differences in precipitation because of our local terrain, such as rainshadows, convergence zones, gaps winds, and more.  Plus, our complex land-water contrasts.

It ain’t Kansas around here.  And forecasting snow in Kansas is a piece of cake compared to our challenges.

The snow forecast tomorrow has all of these elements, with the snow mainly between midnight and 10 AM,

Here is a close-up view of Puget Sound land.  Greens are two inches or less.  Not a big snowstorm for the lowlands–and keep in mind that snow depth increases are LESS than snowfall increases.

Is there uncertainty in the forecast?
Of course!  Slight changes in wind direction or temperatures can greatly change snow amounts locally.   The way we attempt to quantify such uncertainty is through ensembles…many slightly different forecasts.  And the UW has one of the best, highest resolution ensemble systems in the country.
Here are the ensemble snowfall forecasts for SeaTac.  A range from .3 to 1.7 inches of snowfall, with a mean of roughly  .8 inches.  You won’t write an epic novel on this event.  The National Weather Service is going for about an inch.

We are still on track to break out of the freezer on Saturday–with the ice and snow melting over the weekend.

Johnson faces crunch PMQs as pressure mounts over No 10 party