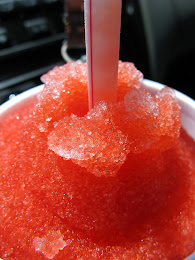 The event last night played out similar to predicted.    For most locations in western Washington, a few inches of wet snow fell and temperatures rose just above freezing.

We have had a remarkably cold period in many ways.   It was the first time since 1998 that Seattle remained below freezing for three days in a row.  Many locations fell below daily low-temperature records.  And Vancouver, Canada at 4.5F had their coldest temperature in 50 years.

The winds and temperatures coming out of the Fraser River valley during this event were historic.

But something interesting (and threatening) could happen tonight and Friday night….a slush freeze…as cold temperatures temporarily return to the region.

Washington DOT and Seattle DOT need to be aware of it.

Good in a cup.  Not so good on our streets.Courtesy of Frankielion
A Tale of Two Types of Streets
Seattle and most other towns have two types of streets:  major roadways in which plowing, sanding, and salting have taken place and the roads are drivable, and the back streets (often with substantial grades) that are snow/ice-covered and nearly impassable.   This SDOT picture this morning shows the situation well.    I can’t drive into or out of my home.

The Slush Freeze Problem
We started with icy/snowy back streets.  Then we added a few inches of wet snow last night, and temperatures are climbing just above freezing throughout the area.  There is even going to be some sunshine today to melt things even more.
In most weather situations, we would warm up and everything would melt out.
But not this year.    Consider the forecast temperatures from the National Weather Service’s National Blend of Models, a calibrated statistical combination of a number of forecast models (see below).  Temperates dropping into the lower 20s the next few nights.

And the National Weather Service GFS model is doing the same thing and even colder, Friday and Saturday morning before we finally pull out of the icebox on Sunday.

Temperatures predicted by the NWS GFS model at Seattle, time increases to the right.  The average of many forecasts indicted by the black line.
My concern is that all of the slush is going to freeze tonight.  And then as temperatures warm near freezing Friday and Saturday afternoons, a super-slick situation will develop.  Nothing is more slippery than ice just above freezing.
Clear the Slush
Today is the day to clear the slush.
SDOT and WA DOT should make efforts to move aggressively on the side streets, once the main roads are clear (and they pretty much are now).  Get rid of slush with plows while it is soft and melting.
You should do the same for your house or apartment.
More Snow Next Week?
Some models are going for more snow next week.  Considering the European Center ensemble of many forecasts (shown below).  In the top panel, there are 51 forecasts (y-axis) and time increases to the right.  The shading shows snow accumulation (darker blue and purple indicate more snow).  The bottom panel shows the average of all the models and the blue line indicates the value of a high-resolution European Center forecast.
Increasing chances of snow on Monday, and the US GFS model is similar.   At this point, I would take it all with a grain of salt, but it bears watching.

For many reasons, our region is one of the most vulnerable to roadway icing.  Perhaps as a new mayor comes into office in Seattle, some discussion of increasing snow removal and road prep capabilities will be discussed.  The economic costs of an ice-impeded city and region are huge and more resources would be an excellent investment both economically and in saving lives.

At least 16 killed after office canteen explosion in China