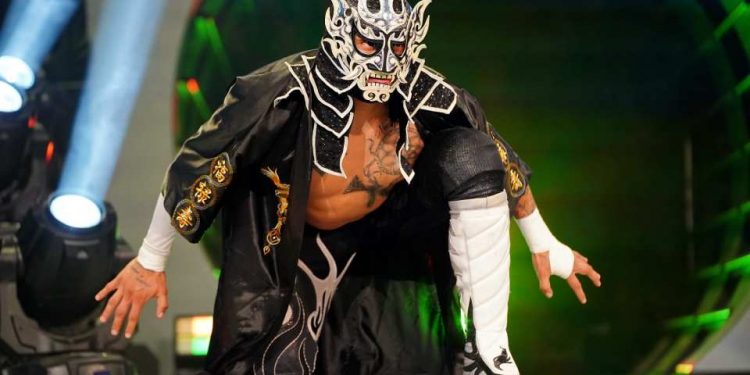 AEW Dynamite closed on a sour note this week as a horrific injury to high-flyer Rey Fenix shocked wrestling fans around the world.

Dynamite, airing in its new home of American broadcaster TBS for the very first time, was main evented by The Lucha Bros defending their AEW Tag Team titles against Jungle Express.

Ref Fenix is one of the world’s best high flyers, but he’s been struck down with a bad injury

During the closing stages, Luchasaurus drove Fenix through a table from the ring apron to the floor outside.

The Mexican superstar’s arm got caught under him during the impact and viewers were left horrified to see his arm bending the other way.

Seeing a lot of concern out there about Rey Fenix after this nasty landing through a table at ringside.

Fenix grabbed his left arm and appeared to be waving for some help.#AEWDynamite #AEW pic.twitter.com/71NYSu7rlC

Bryan Alvarez noted that Fenix did suffer a broken arm – even if that much is obvious – and he went straight to hospital after the show.

In a slightly different version of events, PWInsider ​​posted a report noting that internal belief within AEW is that Fenix ‘likely dislocated his elbow.’ It was further said that a dislocated elbow ‘would be a blessing’ given how bad Fenix’s injury looked in real time.

Many of AEW’s stars took to Twitter after the event to share just how shaken up the locker room was with the terrible injury.

Your arm is not supposed to bend that way, folks!

Matt Sydal said: “I’m crying for @ReyFenixMx right now,” while Jungle Boy, who was in the match with Fenix, said: “Wishing a speedy recovery to Ray Fenix. One of the very best in the world, and one of the greatest people. It’s always an honour to share the ring with you. Much love”.

Fenix, 31, is known as one of the greatest luchadors on the planet today and is well known for his work in Lucha Underground, Japan and IMPACT Wrestling before the formation of AEW in 2019.

The loss brings an end to their first and so far only reign as AEW Tag Team champions, but it seems as though they were planned to lose the belts before the injury and the freak accident didn’t change any plans.

talkSPORT wishes Rey Fenix all the best in his recovery.