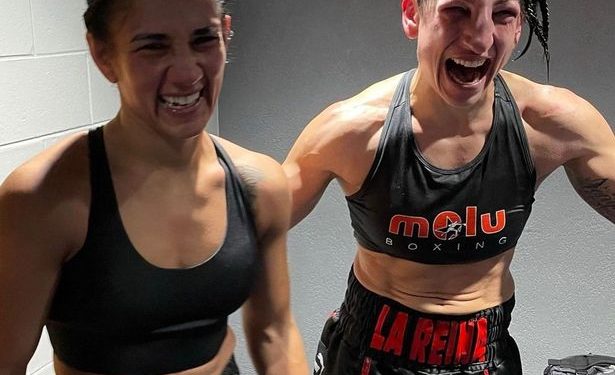 Amanda Serrano dominated her opponent on Saturday night to make a statement ahead of a possible clash with Katie Taylor.

Two of the pound-for-pound best in women’s boxing look to be on a collision course now, but Serrano had to put in an impressive performance at 135lbs and she did just that against the Spaniard Miriam Gutierrez.

The 38-year-old Gutierrez was no rookie. She was 14-1 heading into the contest with her only loss coming against Taylor.

However, Serrano, who is promoted by Jake Paul’s Most Valuable Promotions, beat Gutierrez in a one-sided contest to take a unanimous decision victory, 99-91, 99-90, 100-90.

Gutierrez has since shared pictures of her face after the bout, which saw her take an astounding 234 punches over the course of the fight.

This was how Miriam Gutierrez looked before fighting Amanda SerranoGETTY

Florida Department of Licensing and Regulation has handed down an indefinite medical suspension to Gutierrez and she may never be allowed to fight again after the damage she sustained against Serrano.

Despite the easy win, Serrano had nothing but respect for Gutierrez.

“I want to thank my dance partner Miriam Gutierrez. She didn’t come to lay down.

“I don’t care who is in front of me, I’m not coming to play! She just told me she weighed 160lbs today. Thank god I worked with my girl Nisa Rodriguez who was at 165lbs.

“She’s a tough fighter. She did say she was in better shape this time than when she fought Katie Taylor because she had a year layoff.

“Now, she just had a fight last month that she won. I fought the best Miriam Gutierrez and I beat her.

“This isn’t a sad or bitter loss, it’s a dignified one, it was a war from the get go until the end.

“It’s been an honour. I wanted to be a complete fighter. The knockout, if it came, it came. But I just wanted to make sure that I beat her.

“The strategy was to just go out there and just beat her, beat her every single round and dominate her. Just box and show that I’m an all-around fighter.”

Negotiations for Serrano vs Taylor are expected to start imminently.

Top tips for applying to a UK university