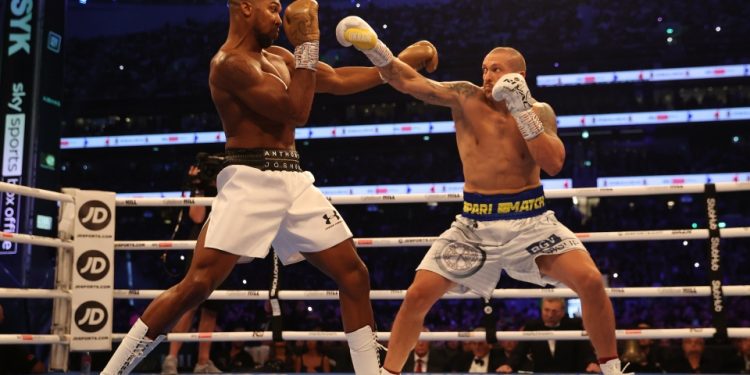 The two heavyweights have been locked into a second fight since Usyk claimed Joshua’s three belts at the Tottenham Hotspur Stadium in September 2021.

Despite initial fears the war in Usyk’s native Ukraine would see the fight called off, it has been pencilled in for July 23 since the champion returned to training.

However, Hearn admits that date may now have to be pushed back, while revealing an official announcement will drop shortly.

“We’re right on the brink now of signing all the paperwork,” the promoter told talkSPORT.

“It is likely you will see a two or three week delay for that fight to land in August.

Hearn still doesn’t have a date for the rematchGetty

born in the usa

Wilder says comeback is because boxing ‘dies without an American champion’

“The fight will happen. I’m very confident you will get an official announcement next week.

“It has been a long task, as it always is to sign these big fights.”

Reports suggest the fight will take place at the Jeddah Super Dome in Saudi Arabia.

Hearn admits the Tottenham Hotspur Stadium would be his preferred choice of venue, but explains why the bout must go to the highest bidder.

Asked about his preference, he said: “Wherever will be the most advantageous to Joshua, which is in London. You always want to fight in your home town.

“The problem is, this fight is a 50/50 split with Usyk, and we have a contractual obligation to maximise the revenue for him.

The Jeddah Super Dome is the favourite to host the fightGetty

“So if there’s an opportunity to earn three or four times more money, Usyk is not going to agree to do the fight in AJ’s home city for a quarter of the money.

“It’s a very difficult job. I’ll end up getting the blame whatever happens, but that’s OK, I’ll take it on the chin.

“This is a very dangerous sport and we need to make sure we get the best deal for the fighters.

“We would love to go back to Spurs, but with the offers that have come in around the world, that is unlikely. We’ll see what lands next week.”

A fight between the pair has been years in the making, but Fury continues to insist he is retired following his recent victory over Dillian Whyte at Wembley Stadium.

Nevertheless, Hearn is planning for Fury next, predicting an early knockout for Joshua in his rematch against Usyk.

He added: “I believe Joshua wins this fight via knockout inside six rounds. It’s a big call.

“But the frame of mind that he’s in, he’s brought Robert Garcia into camp as his new trainer, he looks tremendous.

“The problem with fighting Usyk is everything you hear around it… ‘Oh, I hear he does this, I wonder what it’s like to be in the ring with him’.

“When you’ve done rounds with him, it’s still very difficult, but I think AJ’s experience will help him.

“He will be an underdog going into the fight, great. I think he can do it. I hope everyone’s behind him.