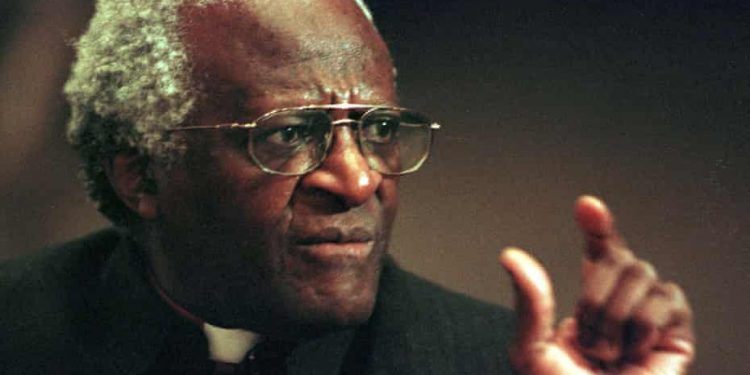 Desmond Tutu, the cleric and social activist who was a giant of the struggle against apartheid in South Africa, has died aged 90.

Tutu, described by foreign observers and his countrymen as the moral conscience of his nation, died in Cape Town on Boxing Day.

“The passing of Archbishop Emeritus Desmond Tutu is another chapter of bereavement in our nation’s farewell to a generation of outstanding South Africans who have bequeathed us a liberated South Africa,” president Cyril Ramaphosa said.

Tutu was diagnosed with prostate cancer in the late 1990s and in recent years he was hospitalised on several occasions to treat infections associated with his treatment.

“Ultimately, at the age of 90, he died peacefully at the Oasis Frail Care Centre in Cape Town this morning,” Dr Ramphela Mamphele, acting chairperson of the Archbishop Desmond Tutu IP Trust and coordinator of the Office of the Archbishop, said in a statement on behalf of the Tutu family.

She did not give details on the cause of death.

Tutu was born in Klerksdorp, a farming town 100 miles (160km) south-west of Johannesburg. The sickly son of a headteacher and a domestic servant, he trained first as a teacher before becoming an Anglican priest.

As a cleric, he travelled widely, gaining an MA in theology from London University. Though he only emerged as a key figure in the liberation struggle in the mid-1970s, he was to have a huge impact, becoming a household name across the globe.

Excitable, emotional, charismatic and highly articulate, Tutu won the Nobel peace prize in 1984. A vocal supporter of sanctions against South Africa, he was detested by supporters of the apartheid regime, who saw him as an agitator and traitor. Tutu was however protected not just by his wit and combative spirit but by his immense popularity and respect. In 1986 he was appointed archbishop of Cape Town, the effective head of the Anglican church in his homeland.

Tutu always kept his distance from the African National Congress (ANC), the party which spearheaded the liberation movement and has now been in power in South Africa for more than 20 years. He refused to back its armed struggle and support unconditionally leaders such as Nelson Mandela.

However Tutu shared Mandela’s vision of a multiracial society in which all communities live together without rancour or discrimination and is credited with coining the phrase “rainbow nation” to describe this vision.

After the nation’s first free election in 1994, Mandela, who had become the president of a free South Africa, asked Tutu to chair of the Truth and Reconciliation Commission (TRC), the controversial and emotional hearings into apartheid-era human rights abuses.

The TRC was described as the “climax of Tutu’s career” and lauded across the world as a pioneering effort to heal deep historic wounds.

However Tutu found the experience deeply traumatic. He was saddened and perplexed by the ferocious criticism from the white rightwing, some mainstream liberals and the ANC. The terrible testimony that he listened to day after day brought deep emotional stress too, with TV viewers watching as the tough, witty cleric put his head in his hands and wept.

In late 1990s, Tutu, suffering prostate cancer, began to spend more time with his wife of 60 years, four children, and numerous grandchildren. He continued to criticise the ANC and was initially excluded from the state funeral of Nelson Mandela in 2013. His absence provoked a public outcry. Tutu later said he had been “very hurt.”

Despite his illness, Tutu remained interested in world affairs and determined to use his enormous moral prestige to make a difference. In 2015, he launched a petition launched urging global leaders to create a world run on renewable energies within 35 years was backed by more than 300,000 people globally. It described climate change as “one of the greatest moral challenges of our time”.

He also spoke out against homophobic legislation in Uganda and argued in favour of assisted dying.

“Desmond Tutu’s voice will always be the voice of the voiceless,” Mandela said.

In 2009 Barack Obama described Tutu as “a crusader for freedom, a spiritual leader … and a respected statesman [who] has become a symbol of kindness and hope far beyond the borders of his native land.”

Friends remembered Tutu as a man of deep faith whose charm, warmth and intelligence few could resist, and who was happiest when active on behalf of others.

“I love to be loved,” he told the BBC’s Sue Lawley when appearing on Desert Island Discs in 1994.