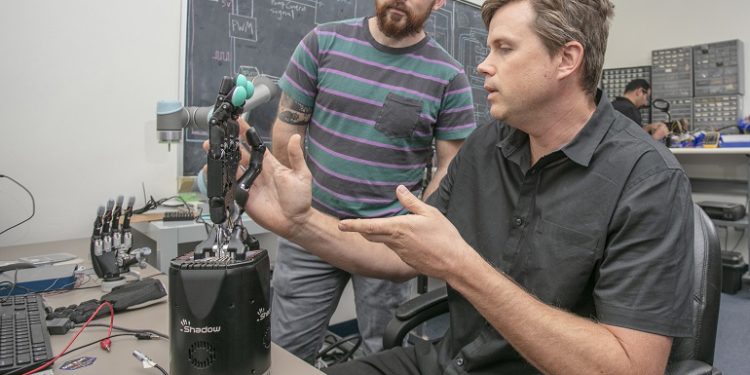 Researchers at Florida Atlantic University have created a system for a robotic hand that provides finger-specific haptic feedback for a user, significantly improving dexterity. By delivering haptic feedback for objects grasped with the thumb, index, and little finger, the system allows users to control a robotic hand to pick up and set down two objects at once, without dropping or breaking them, even without seeing the objects. Researchers hope that the technology could enhance control of robotic prostheses, offering a new dimension of dexterity.

Robotic prostheses are advancing in their complexity and utility, but they are still limited in the tasks they can complete. For instance, playing musical instruments or typing on a keyboard may be nearly impossible for many prosthetic users. Part of the problem lines in the limited dexterity of such devices. Although modern robotics may allow such prostheses to produce individual finger movements, they do not typically match this with appropriate haptic feedback to allow users to feel the object they are interacting with on a finger-specific basis.

“Enabling refined dexterous control is a highly complex problem to solve and continues to be an active area of research because it necessitates not only the interpretation of human grasp control intentions, but also complementary haptic feedback of tactile sensations,” said Stella Batalama, a researcher involved in the study. “With this innovative study, our researchers are addressing the loss of tactile sensations, which is currently a major roadblock in preventing upper limb-absent people from multitasking or using the full dexterity of their prosthetic hands.”

The haptic feedback is delivered through a soft robotic armband, which includes three soft actuators that deliver a force to the user’s arm that is proportional to the force applied by the robotic finger to the gripped object. Vibrotactile stimulators in the armband also provide a signal if the gripped object is broken by the robotic hand. The device can provide feedback for the thumb, pinky, and index finger on the robotic hand, with three corresponding air chambers in the armband.

So far, the approach appears to enhance user dexterity when controlling a robotic hand. “Examples of multifunction control demonstrated in our study included the proportional control of a card being pinched between the index and middle fingers at the same time that the thumb and little finger were used to unscrew the lid of a water bottle,” said Moaed A. Abd, another researcher involved in the study. “Another simultaneous control demonstration was with a ball that was grasped with three fingers while the little finger was simultaneously used to toggle a light switch.”

See a video about the technology below.

Emerging Europe’s rock — five bands you need to know about