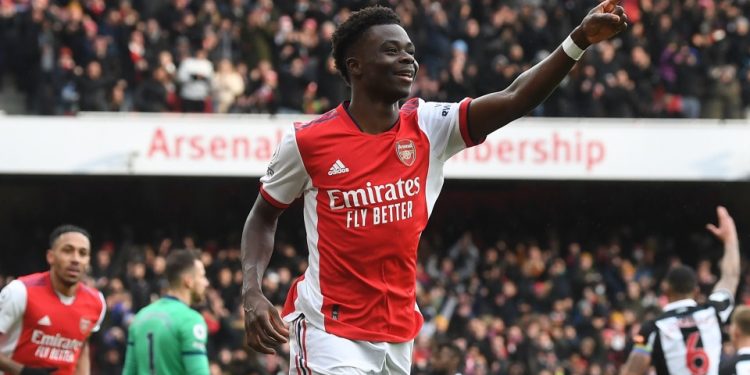 Arsenal have been told to tie homegrown youngster Bukayo Saka down to a new contract to ward off reported interest from Premier League rivals Liverpool.

Gunners legend Sol Campbell has issued a warning to his old club to learn from their previous mistakes over player contracts and offer Saka fresh terms to secure his future.

Saka has played a huge role in Arsenal’s resurgence this season.

The north London side were tipped to struggle after a nightmare start which saw them lose their opening three matches and in September they were still sitting rock-bottom of the Premier League table with zero points and zero goals.

But the club’s young stars have injected a freshness into a stale team, with Saka scoring five goals and setting up a further four to help Mikel Arteta’s shoot up into fourth place as they go into 2022.

The England international’s sparkling form has led to reports Liverpool are keeping a close eye on his progress and contract situation.

Saka’s current deal runs out in 2024, and Arsenal have a reputation for allowing contracts to run dangerously close to their expiry date – allowing space for rival clubs to swoop in and try and turn players’ heads.

The 20-year-old only signed his current contract in July 2020, but his impressive progress for club and country since then has led to calls for the club to reopen talks to extend his stay.

And Campbell has called for Arsenal to secure the future of one of their own, with Saka one of the most promising talents the club has produced for years.

“When you get young players who just come out and do really, really well, you’ve got to protect them, you’ve got to secure them,” the Invincibles legend told the talkSPORT Breakfast.

“They’re the lifeblood for the fans, for their country, England, and especially Arsenal.

“You can’t allow top, top players to run their contracts down and move on because you’re taking too long.

Mesut Ozil’s mega-money deal, decline and then sour exit may have affected the way Arsenal handle their player contractsAFP or licensors

“It’s happened before but that was all about big, big money, it took a long time to secure their contracts – why?

“When a club takes so long to secure the future of a player, if you wait too long, they’re going to get offers from other teams around.

“Sometimes you can agree a price but if you wait six months [to get the deal signed] the price might now be different, it could be more.

“So you’re thinking, why didn’t you secure that price six months ago, when you would have paid less money, secured the player and everyone would be happy, instead of trying to drag it out and trying to be clever with negotiations?”

Court to unseal deal between Jeffrey Epstein and Virginia Giuffre