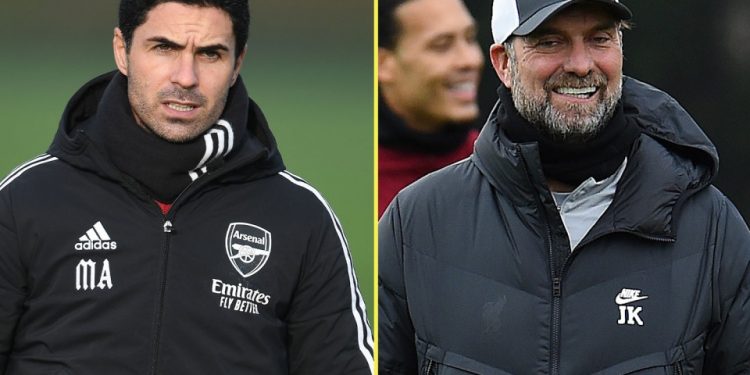 Arsenal and Liverpool are set to lock horns in the first leg of their Carabao Cup semi-final having both seen their squads depleted by AFCON-related absences.

However, the rising COVID-19 cases in Jurgen Klopp’s squad has meant the Reds are already fearing they may not be able to play this week.

And the extra challenge of the Africa Cup of Nations has seen them lose more squad members including both Mohamed Salah and Sadio Mane.

The Carabao Cup tie is set to take place on Thursday, January 6 at the Emirates and kick-off is scheduled for 7:45pm.

The match will be live on talkSPORT with our coverage starting at 7pm.

Adrian Durham will be your host while commentary will be provided by Jim Proudfoot and former Republic of Ireland midfielder Andy Townsend.

The Gunners are without Thomas Partey, Nicolas Pepe, Mohamed Elneny and Pierre-Emerick Aubameyang due to AFCON duty.

Eddie Nketiah is expected to miss out after a positive Covid test, while Gabriel will be serving his one-match ban due his red card against Man City.

As for Liverpool, Klopp is set to miss the first leg due to self-isolation rules, with Alisson Becker, Roberto Firmino and Joel Matip also in quarantine.

The start of AFCON has seen their list of absentees increase by three with Mohamed Salah, Sadio Mane and Naby Keita all heading to Cameroon.

Nat Phillips and Harvey Elliott are both long-term absentees but Andy Robertson can return from his three-match suspension.

Arsenal vs Liverpool: What has been said?

Liverpool assistant coach Pep Lijnders is positive the Reds have the firepower in attack to offset the loss of chief marksmen Mane and Salah.

“You can try to plan it but you can never prepare it,” Lijnders said following the 2-2 draw with Chelsea.

“It is not a worry because we have faith in the boys we have and a few boys are coming back as well.

Migrants are not weapons: Stop viewing them as such