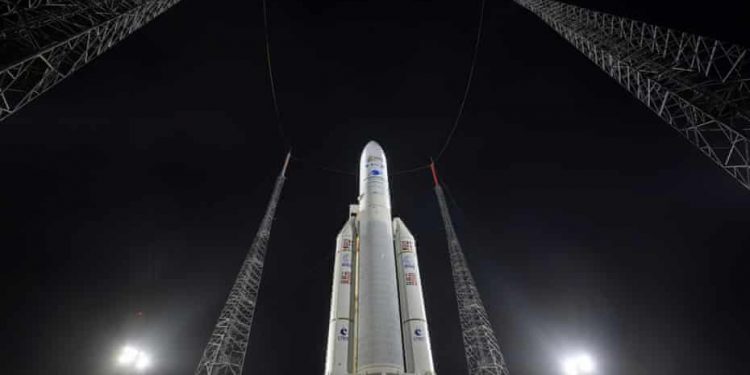 Final checks and fuelling are under way for the launch of the James Webb Space Telescope, a flagship mission for Nasa that aims to observe worlds beyond the solar system and the first stars and galaxies that lit up the cosmos.

If all goes to plan, the $10bn (£7.4bn) observatory will become the largest and most powerful telescope ever sent into space when it blasts off at 12.20pm UK time on Christmas Day onboard an Ariane 5 rocket from the European Space Agency’s spaceport in Kourou, French Guiana.

It has taken more than 30 years to conceive, design and build the telescope and the project has been beset with delays, cost overruns, redesigns, and technical glitches that postponed the launch as recently as this week.

“I’m excited and nervous at the same time,” said Prof Martin Barstow, chair of the Space Telescope Institute Council and director of strategic partnerships at Space Park Leicester. “It’s exciting to think that after so long, we might eventually get this telescope into space. But I’m nervous because we all know that however good the rocket is, there are risks in getting there, and a whole lot of things have to go perfectly for us to have a working telescope.”

At the heart of Webb is a 6.5-metre primary mirror that will enable the telescope to observe the faint glow from some of the oldest, most distant objects in the universe. Because the universe is expanding, light emitted from stars and galaxies is stretched as it travels, meaning that the glow from the earliest stars is “redshifted” into the longer wavelengths of infrared light.

Unlike the Hubble space telescope which orbits the Earth, Webb will orbit the sun. It is bound for a spot called L2, or the second Lagrange point, a million miles from Earth. Here, gravitational forces will allow the telescope to observe the heavens in the infrared realm, with the Earth and the sun to its back.

Webb’s primary mirror is so large that it must be folded up for launch and unfolded during the month-long journey to L2. Along the way, the telescope will also deploy a sunshade the size of a tennis court to help shield the telescope from the sun’s rays.

“We want it really cold and space isn’t that cold,” said Barstow. “There’s a lot of infrared out there from the Earth and sun that will warm things up. To cool everything down takes a long time.”

Beyond observing the first stars and galaxies, Webb will watch alien worlds cross the faces of their stars and measure how infrared light is absorbed in the planets’ atmospheres. This will provide hints about the atmospheric chemistry and potentially conditions ripe for life.

“In terms of the science, this is going to be transformational,” said Barstow. “It’s quite simply the largest, most sensitive telescope ever put in space. It’s been designed to look back at the very early history of the universe and to understand the formation of the first stars and galaxies. And it’s about us. It’s about how we came to be and what our place is in the universe.”

If Webb arrives at L2 unscathed, mission scientists will spend a further five months checking out the telescope’s systems and ensuring they are working properly before taking data at the start of the summer.

“I just want it to be there and working,” Barstow added. “There are thousands of astronomers waiting to use this telescope. It’s important to remember this is a huge endeavour. There will be a lot of people around the world biting their fingernails tomorrow.”