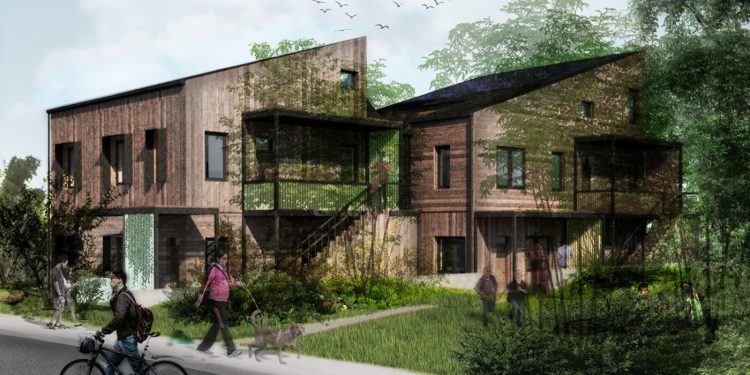 This is Part 1 of a 3-part series on Baltimore’s grassroots activism for racial justice.

Carlos Sanchez-Gonzalez, now 16, grew up in the working-class South Baltimore neighborhood of Curtis Bay. He recalls first experiencing housing insecurity when he was about 9. “My dad thought it would be better to pay the mortgage instead of the electricity, and we went four months without power,” he says.

His family spent the winter without heat, and as a result, Sanchez-Gonzalez’s father developed a bad case of pneumonia. He and his brother caught the illness, too, but the family still couldn’t afford to pay the utility bill. “It was hard to sleep at night,” he said. “We sometimes had to sleep with clothes on.”

Before the pandemic, close to half of U.S. renters were spending more than 30% of their income on housing. The spread of COVID-19 made the crisis even worse, with 1 in 4 urban families falling behind on rent, and as many 15 million currently facing eviction after the federal eviction moratorium expired in September.

When Sanchez-Gonzalez was 14, he first learned about community land trusts through Free Your Voice, a youth-led activist group at his school, Benjamin Franklin High. Such trusts are a tool that empower communities to create housing that is affordable for working families. He has been advocating for community land trusts ever since, knocking on doors across the city and sharing his story at public hearings so others don’t endure the same hardships he faced.

After years of struggle, community land trust housing is slated for construction in Sanchez-Gonzalez’s neighborhood, and comes with other benefits besides being available at below-market rates. The units will be passive homes, which are highly energy efficient, through solar panels and designs that circulate air and regulate temperatures, resulting in 90% lower energy costs. The houses also eliminate airborne pollutants that have long plagued the Curtis Bay community, which is near two incinerators and an open air coal pile, and Baltimore City as a whole, which has an asthma rate twice the state average.

When a household sells their stake in the property they share the equity with the community, so the family can build wealth and so that the property remains affordable. Baltimore’s housing crisis particularly affects African Americans, who have half the median income of their White counterparts, a 2017 study found.

This racial wealth gap was created by a century of discriminatory public policy. In 1911, Baltimore became the first city in the nation to mandate residential racial segregation. Later, New Deal policies codified segregation, using redlining to prevent African Americans from accessing government-backed home loans, thereby denying them access to wealth-building that subsidized the creation of the White middle class.

This legacy of hyper-segregation and disinvestment created what scholar Dr. Lawrence Brown calls the “Black Butterfly,” which consists of disinvested Black neighborhoods that surround the “White L”, an area of wealthy, predominantly White homeowners who have greater access to everything from educational resources to mass transit.

More recently, lax regulations have allowed out-of-town slum lords to charge high rents for squalid living conditions. Wealthy developers have long exploited loopholes that allow them to reap tens of millions of dollars in tax breaks designed to subsidize affordable housing while not building those units. Activists demanded that the city give some of that money to residents instead.

Following those demands in 2016, city voters passed a ballot measure creating the Affordable Housing Trust Fund and requiring the city to use it for affordable housing. In March 2021, the fund finally made its first distribution of $2.25 million to community land trusts to create 26 units of affordable housing.

One such trust was the South Baltimore Community Land Trust, which focuses on development without displacement and on transitioning the city away from burning or burying waste. The trust will use $750,000 to create its first 10 units of affordable housing in Curtis Bay; builders expect to break ground in the coming months. The housing will be available to residents who make less than $46,000 a year, through a 99-year-lease, which allows homeowners to build wealth through equity that will be split with the land trust when they sell their property.

“Seeing how communities are affected by disinvestment, this focus on community control and development is a way to bring about real change,” explains Meleny Thomas, 36, executive director of the South Baltimore Community Land Trust. “The only way that can happen is through subsidized affordable homeownership opportunities and partnerships with other agencies.”

The passive homes will also help residents cope with the environmental racism their communities endure. “This new, affordable housing will be perfect for people and children that have asthma and respiratory conditions,” Thomas said.

When Baltimore Mayor Brandon Scott announced the distribution of an additional $4 million to community land trusts in September, he framed it as a local “movement.” “The Community Land Trusts movement represents both a tangible and scalable strategy to help us build community power,” Scott said in a press release. “This work will have an added impact on community development, land use, and affordable housing and can be transformative for our city.”

“A lot of people said they were paying $1,100 a month for a one- or two-bedroom home that had mold and the roof was leaking,” says 24-year-old Curtis Bay resident Shashawnda Campbell.

Campbell became interested in community land trusts when she was a 15-year-old fighting against the construction of an incinerator 2 miles away from her home. Residents told her they were worried about pollution, but their biggest concern was a lack of affordable housing. Campbell wanted to ensure that demands for a cleaner, healthier community didn’t result in the displacement of longtime residents.

Instead of paying on average $1,400 a month in rent for a two-bedroom house, future residents of the community land trust can expect to pay only $600—700 a month.

“It’s a way for people to stay in their communities and own something and it puts subsidies in the homes itself, where it stays affordable for future families,” says Campbell, who is now an organizer with the South Baltimore Community Land Trust.

After the Affordable Housing Trust Fund was created, previous mayors dragged their feet in implementing it. But activists kept the pressure up, gathering thousands of signatures and packing public hearings to demand city officials use the fund to create public housing. “No one knows our communities better than us, and we will fight for them,” an outraged Campbell told the commission overseeing the trust fund in 2019 after the commission announced it would only commit $1.5 million to community land trusts.

A testament to the success of the movement, today, Baltimore’s Affordable Housing Trust Fund has dedicated more than 30% of its funding to community land trusts, including $16 million over the next three years.

Activists acknowledge that even the increased level of funding isn’t enough. In August, 25,000 families in Baltimore were behind on rent and faced potential eviction when the Supreme Court struck down the federal eviction moratorium. City programs and federal rental assistance helped prevent an eviction tsunami, but rising rents are forcing families to pay a growing share of their income on housing.

In contrast to landlords who rejected rental assistance to evict tenants during the pandemic, community land trusts also raise capital to ensure their residents can weather difficult financial times and avoid eviction, and also offer help navigating the home-buying process. “The land trust model is not only about providing affordable housing, but it’s also providing a voice in the actual governance,” says Greg Sawtell, Zero Waste Just Transition Director for the South Baltimore Community Land Trust.

“Community land trusts are a tool to help hardworking families to obtain permanently affordable, decent good quality homes,” says Sanchez-Gonzalez. He says that helping families obtain affordable housing is a fundamental building block for a healthy community, and will keep young people from “going down the wrong path to ensure their families can make ends meet.”

“This is the thing that keeps me going, being able to prevent this from happening to other families,” he adds.

Business In 2021: The Impact Covid Has Had On Tutoring Businesses