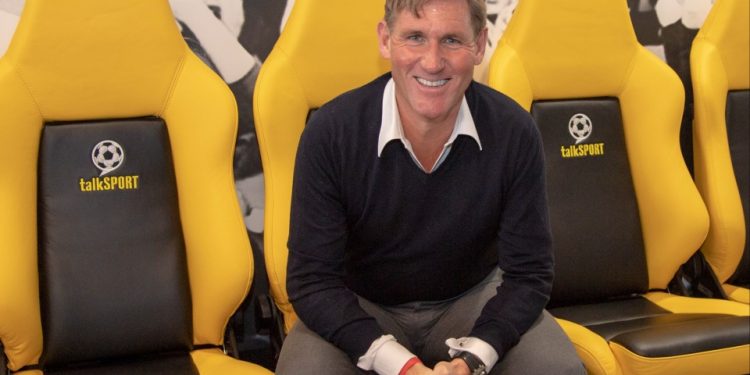 As 2021 draws to a close, talkSPORT.com looks back on another year of box office radio and flamboyant phrases from everybody’s favourite straight-talking pundit – no, not you, Roy Keane…

Of course, we’re talking about the one and only Simon Jordan, the talkSPORT host never shy of saying what he means… and he certainly means what he says.

There’s never a dull moment at talkSPORT Towers, and Mr Jordan is one of the reasons why. From his sage insight into the beautiful game, to his no-nonsense interviews and an unrivalled vocabulary, the former Crystal Palace owner is a much-loved figure with talkSPORT fans.

Nobody says it like it is on the airwaves than Mr Opinion himself, and it’s just not an on-air bust-up without him – actually no, there aren’t any on-air bust ups without him, that’s it.

But we wouldn’t have it any other way.

So, dictionaries at the ready, because here’s a selection of some of the most memorable Simon Jordan talkSPORT moments from 2021.

We start with one of his more explosive rants about England international Trippier – and he sure had plenty to say about the full-back.

You might be familiar with Simon’s scorn for misbehaving players – more on that later – but he really took Trippier to task over this one, branding him ‘ghastly little wretch’, a ‘slob’ and a ‘disgrace’.

Agents Mino Raiola and Kia Joorabchian have felt the full force of Simon’s fury live on air, and next it was Staveley’s turn as he took the businesswoman to task over her role in the Newcastle takeover.

Mr Jordan would ultimately be left with egg on his face as the takeover he insisted would never go through, well, did.

But you could say Newcastle have Simon to thank, with Staveley sending a defiant message to fans during this incredible clash that they were going nowhere. And, we all know what happened next.

Ronaldo and Messi are ‘rats’

Many words have been used to describe Cristiano Ronaldo and Lionel Messi – but ‘rats’ was probably a first.

Undoubtedly two of the greatest footballers to have ever kicked the bag full of wind, but Mr Jordan took exception to the timing of their departures from Juventus and Barcelona.

Likening it to a captain deserting a sinking ship, it’s fair to say the White and Jordan host was not impressed with their summer transfers to Manchester United and Paris Saint-Germain.

Ronaldo and Messi were branded ‘rats’ for deserting Juventus and Barcelonagetty

If anything is certain, it’s that Simon loves a wind-up – with fellow host Jim White and his beloved Scotland often his primary target.

But he perhaps took things a bit too far when he made fun of the proud Scot and ‘grotty little sidekick’ Sir Rod Stewart.

“Grotty? How dare you – I’m a knight of the realm and a CBE! Be a man and apologise!”

You tell him, Sir Rod!

Puts Newcastle shirt ‘where it belongs’…

Well, here’s something you don’t see every day.

talkSPORT got behind Football Shirt Friday back in November, raising money for the Bobby Moore fund and Cancer Research UK, as talkSPORT presenters donned their favourite kits, including some lovely retro numbers.

But Mr Jordan doesn’t do things by halves and just had to make a statement with his get-up… and statement he certainly made, as he wore a Newcastle shirt like a dress around his backside, insisting that the black and white stripes were ‘where they belong’.

OK, that’s not what he actually said. What he said was: “The geography of the shirt is in the appropriate position, as far as I’m concerned.” He never has been one for keeping things brief…

Jordan proudly showed of his Football Shirt Friday outfit, and couldn’t resist another dig at NewcastletalkSPORT

2021 will be a year Manchester United may want to put behind them, with things looking brighter for 2022 after a much-needed change at the top.

Simon made his thoughts on how it would end for Ole Gunnar Solskjaer clear from the very beginning, and he was eventually proven absolutely correct.

We hate it when that happens.

Simon branding Ryan Fraser a ‘wretched turd’ for jumping ship from relegation-destined Bournemouth for Newcastle was one of the highlights of 2020.

In 2021 it was turdgate 2.0, but this time it was directed at the entire Magpies team as he defended old mate and former Crystal Palace employee, Steve Bruce.

A very late entry into the 2021 highlights reel saw Simon slam the behaviour of ‘moron’ Jack Grealish over his latest night out storm.

Mr Jordan was then told to apologise, saying he’d taken things to far with his personal insults towards the Man City and England star.

But he refused… and then called Phil Foden – who went out with Grealish that night – a ‘twit’.

Another one for the flamboyant phrases fans out there.

Saying somebody is an idiot, a traitor or a fool is simply not enough…

Roy Keane ‘finished as a manager’

And we end with Mr Opinion’s… opinion on the British media’s other straight-talking pundit.

Roy Keane’s name is rarely missing from the list of managers regularly tipped for jobs, and it was no different when Celtic were looking for a new boss earlier this year following the departure of Neil Lennon.

Like Lennon, Keane is ex-Celtic player and the Irishman was widely tipped as a contender for the hotseat.

But Simon told the former hard-man midfielder to get comfortable in the pundit’s chair, as he won’t be returning to the dugout anytime soon.

Let him down gently, Simon.

Thanks for reading, thanks for listening and raise a glass for 2022 – he’ll be back next year for more of the same!