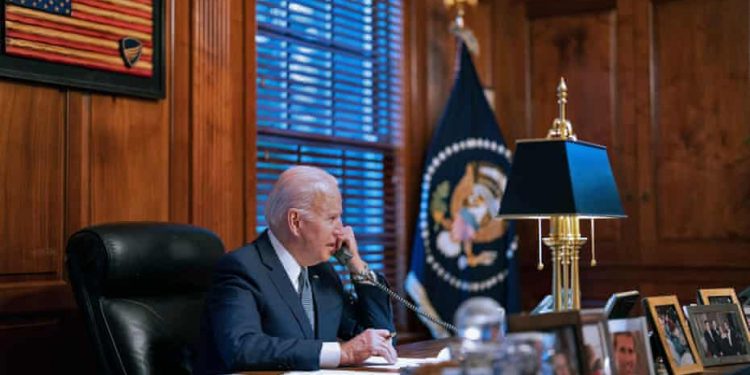 Joe Biden and his Russian counterpart Vladimir Putin held a 50-minute phone call on Thursday amid rising tensions over Ukraine.

The talks, requested by Putin, were the leaders’ second conversation this month, with Biden hoping to find a diplomatic path but warning of severe consequences if Russia invades its neighbour.

Russia has alarmed the US and its allies by massing tens of thousands of troops near its border with Ukraine over the past two months. This follows its seizure of Ukraine’s Crimea peninsula in 2014 and its backing of separatists in eastern Ukraine.

Moscow has called for legally binding guarantees that Nato will not expand further eastwards, and that certain offensive weapons will not be deployed to Ukraine or other neighbouring countries. Washington regards some of the demands as non-starters.

In a preview of the call on Wednesday, a senior White House official warned that “we are at a moment of crisis” and that the Russian military presence around Ukraine “remains a continuing source of grave concern”.

The US is prepared to seek a diplomatic solution but also to respond if Russia advances with a further invasion, the official told reporters. “We have coordinated with our allies to impose severe sanctions on the Russian economy and financial system, far beyond what was implemented in 2014.

“We have made plans to reinforce Nato’s force posture in allied states in the event of a further invasion, which would destabilize the security situation in Europe and demand adjustments to Nato forces and capabilities, especially on the eastern flank.

“And we are prepared to provide Ukraine with further assistance to defend its territory and respond to a potential Russian occupation should a further invasion proceed in the coming weeks.”

Biden, who is spending the week in his home state of Delaware, spoke to Putin from his home near Wilmington. The White House distributed a photo of the president speaking to the Russian leader from a desk lined with family photos. Both the White House and the Kremlin are expected to provide their summaries of the calls soon.

Biden and Putin had been expected to discuss a range of topics, including slow-moving negotiations over resurrecting the Iran nuclear deal.

Putin, who held a video call with Biden on 7 December, has compared the current tensions to the cold-war era Cuban missile crisis in 1962. He denies planning to attack Ukraine and insists that Russia has the right to move its troops on its own soil.

The talks come ahead of a 10 January US-Russia security meeting, followed by a Russia-Nato session on 12 January, and a broader conference including Moscow, Washington and other European countries slated for 13 January.