Boxer was on verge of tears after KOing his own brother in crazy fight for Japanese title, which Wladimir Klitschko and Vitali Klitschko refused to replicate 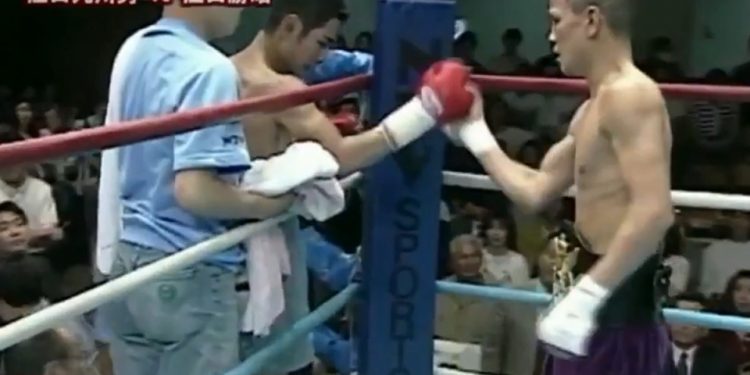 Kusuo Eguchi and Katsuaki Eguchi set a rare precedent for brothers boxing one another when they fought for the Japanese minimumweight title.

Back in 1993, the national belt had become vacant with both boxers vying to win it.

Kusuo and Katsuaki shook hands after the KO

While younger brother Katsuaki was 22 and held a record of 10-4.

The opportunity to fight for the Japanese title was too big to pass up and so they agreed to face each other for it.

The fight began in dramatic fashion as neither brother held anything back.

The brothers refused to look when they knocked each other down

Kusuo dominated the opening minute, but was then staggered by Katsuaki.

The older brother quickly regained control though and floored his younger brother with a series of left hands.

As his Katsuaki recovered to his feet, Kusuo chose not to look and instead stood with his head bowed, staring at his corner.

However, when the referee waved for action to resume, there was no mercy.

Katsuaki just about survived to the end of the round.

He then sprung a surprise as he returned the favour and knocked Kusuo down with a left hook in round two.

Like his brother earlier, he refused to look and instead faced the corner before the referee called for action to resume.

The pair traded heavy leather in rounds that followed all the way up until the sixth.

The KO came in round six

Kusuo refused to look as the fight was waved off

By this point, Kusuo was back on top.

The older brother started to clearly hurt his younger sibling, then KOd him with a massive left uppercut.

Kusuo knelt in his corner as the fight was waved off and kept his head down throughout the celebrations.

Thankfully, Katsuaki was not badly injured and left the ring on his feet, shaking hands with his brother as he did so.

The Klitschkos had all the belts, but never fully unified as they would not face one another

In more recent times, big name brotherly champions such as Jermall Charlo and Jermell Charlo or Wladimir Klitschko and Vitali Klitschko have refused to meet in the ring.

The Klitschkos stood as the two best heavyweights in the world for a decade, but never fought each other.

Wladimir simply explained: “We promised our mother not to fight each other.”

AGDQ Broke $1 Million Raised For The Prevent Cancer Foundation On Wednesday, And They’re Not Done