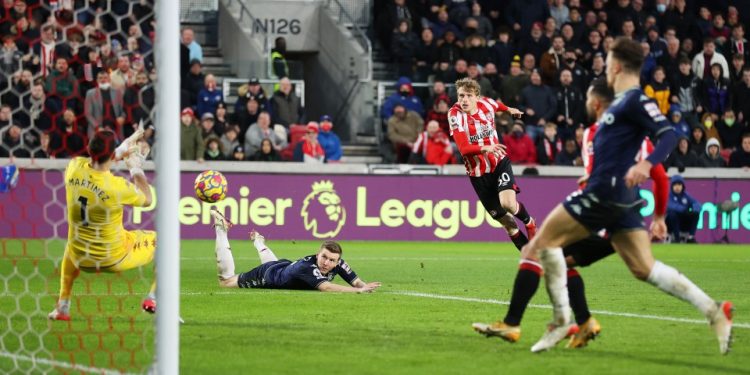 Mads Roerslev scored one and created another as Brentford came from behind to defeat Aston Villa in a 2-1 victory in west London.

After Danny Ings opened the scoring with a superb finish, Yoane Wissa netted a beauty before Roerslev slotted home late on to seal a superb win for Thomas Frank’s men.

The winner came from an very unlikely source – Mads RoerslevGETTY

Wissa scored a beauty to spring Brentford into lifeGETTY

The striker levelled with a lovely curling effort

The visitors dominated the early possession with their boss Steven Gerrard back on the sidelines following a spell at home with COVID-19.

And his side got a deserved lead after 15 minutes when Emi Buendia sent Ings through for his first goal since October.

It was a superb assist from the Argentine, who has so far struggled to live up to his billing at his new club despite glimpses of brilliance.

It came after Ings tucked in an openerGETTY

Brentford were struggling to break through Villa’s resolute backline but Wissa fired over their first effort over the bar as the hosts began to build momentum.

However, against the run of play, the Bees sprung into life through the electric Wissa.

The DR Congo international brilliantly collected from Roerslev before tucking home a beauty of a shot into the top corner to level the scoreline just before half-time.

Buendia was superb for Villa throughoutGETTY

After the break, the encounter turned into a more hard-fought battle between the two sides.

Villa began to assert their dominance once again midway through the second half, with Ings creating space for himself before shooting into a Brentford defender.

However, Frank Onyeka almost gave Brentford the lead moments later as he fizzed an effort at Emiliano Martinez, who got down well to push his shot wide of the post.

Ings flicked an effort into the hands of Alvaro Fernandez as the game went into it’s final 10 minutes with both sides searching for a winner.

And the deadlock was eventually broken by Roerslev as he rifled his second effort on goal into the corner to send the Brentford Community Stadium into ecstasy.

Ings, however, almost responded for Villa immediately as his low effort from five yards was blocked by Fernandez.

But Frank’s men resilience eventually paid off and Gerrard got his return off to a disappointing start, with his side dominating for several stages of the clash.