Britain’s Tories get queazy about sleaze 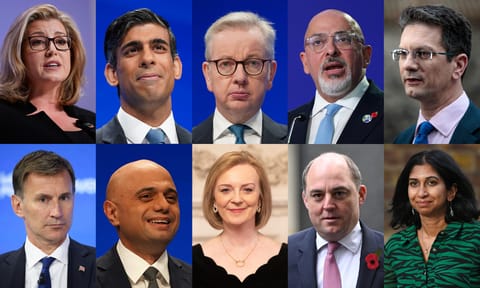 LONDON — The Conservative Party has decided it has a problem with integrity.

Boris Johnson’s resignation, which came after months of building pressure over concerns about his conduct in office, has fired the starting gun on a Tory leadership contest that will center around the importance of ethics and integrity in politics.

But the contenders to replace him — and there are many — will struggle to wipe their hands clean of the sleaze scandals that have engulfed Johnson’s government.

The trigger for the domino effect that saw more than 50 members of Johnson’s administration quit, was the resignation of Health Secretary Sajid Javid on Tuesday night followed minutes later by that of Chancellor Rishi Sunak. Both, according to their public statements and private briefings from their allies, resigned because they felt No. 10 Downing Street’s handling of a row concerning sexual misconduct allegations against senior MP Chris Pincher had been the final straw.

Whether by their own volition or because they correctly read the consensus among those at the top of the party, Javid and Sunak’s decision to move against the prime minister unleashed an outpouring of discomfort and frustration with a leader who appeared to believe normal rules didn’t apply to him.

There were signs, too, that concerns about Johnson’s integrity were starting to hurt the party at the ballot box. Less than two weeks ago, the Conservatives suffered two painful by-election defeats, causing many senior Tories to speculate — some publicly, more privately — about the damage their leader was doing to the party. When Johnson this week conceded he had been warned about Pincher’s behavior but had “forgotten,” many could no longer stomach supporting the prime minister.

Who wants to be UK prime minister? Just about everyone

Boris Johnson has resigned but who will replace him from the Tory ranks?

Research by the UCL Constitution Unit found in January that U.K. voters value integrity most in political leaders. When asked to “imagine that a future prime minister has to choose between acting honestly and delivering the policy that most people want,” 71 percent of those surveyed chose honesty and only 16 percent chose delivery.

“The most important thing to Rishi is honesty, integrity and competency,” said a supporter of the former chancellor, who is expected to mount a leadership bid within days. “He is fundamentally loyal and remained loyal through difficult periods, particularly in the last eight months or so, but ultimately the party and the country has to come first.”

Allies of Sunak had been urging him to quit for months, one explained, particularly when he was fined by police for attending a lockdown-breaking gathering in the Cabinet room in Downing Street for Johnson’s birthday.

Javid, who is also known to be preparing a run for the leadership, told the House of Commons in a resignation speech this week: “Treading the tightrope between loyalty and integrity has become impossible in recent months, and I will never risk losing my integrity.”

But both Javid and Sunak have faced controversies of their own.

Sunak suffered huge reputational damage when the Independent reported in April that his wife Akshata Murthy had non-dom status, meaning that she did not pay U.K. taxes on income earned abroad. Soon afterward, Javid disclosed that he had held non-dom status for six years while working as a banker.

Even without individual controversies, other Tory leadership candidates will struggle to shake the sleaze that has dogged Johnson’s administration. Allegations of sexual impropriety against Pincher had been circling around Westminster for years, and wannabe leaders may face questions about what they were aware of.

Their stance on issues of integrity more widely over the past year will be scrutinized. Several will have backed the government in a bid to block a sanction against Owen Paterson, who had been found guilty of an “egregious” breach of lobbying rules by the parliamentary standards commissioner. The government eventually U-turned and Paterson resigned as an MP.

Any of the candidates who recently served as ministers will be asked why they propped up Johnson’s government during successive sleaze scandals.

Suella Braverman, the attorney general, has announced she will run. Tom Tugendhat, the chairman of the House of Commons foreign affairs committee, is expected to stand and has already amassed support from Tory moderates.

Johnson has said he will stay in No. 10 Downing Street while the party elects his successor. This is expected to happen by the end of August.

A new executive of Tory’s organizing group, the 1922 committee, will be elected on Monday, and will approve the process for the leadership election then, a member of the committee said. Candidate nominations are expected to open early in the week.

The contest is likely to be a rapid one, with parliamentary stages completed before the summer and a new leader elected before the Commons returns from its summer recess in September.

What could delay things is an intervention from the Conservative Party board — which will need to sign off the timetable — and could argue that there needs to be a longer campaign with hustings in different parts of the country, as happened when Theresa May resigned in 2019.

For a party wanting to move on from scandal, this will be a long summer of talk about sleaze.