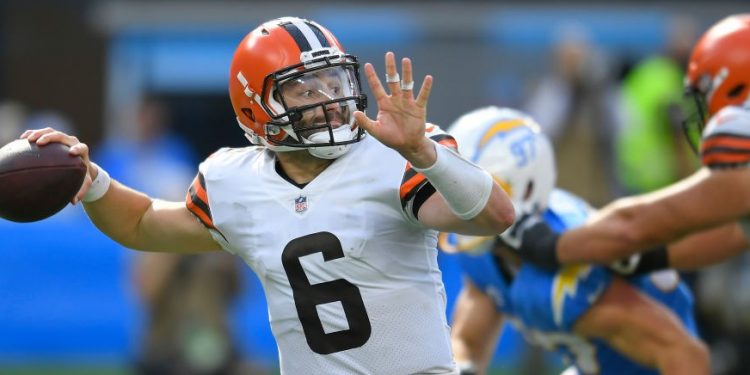 The Cleveland Browns are a wildly frustrating football team, as they clearly have the talent to be a contender in the AFC, but are maddeningly inconsistent — which has been exasperated by injury and COVID absences. No one fits this description more than quarterback Baker Mayfield, who will at times look like the franchise centerpiece but also can look like someone who shouldn’t be starting in the NFL (sometimes oscillating between these two forms from one drive to another).

On Saturday, the Browns were in Green Bay for a must-win Christmas Day tilt with the Packers if they were to keep playoff hopes alive at 7-7, and after an opening touchdown drive, the bad version of Baker arrived with two first quarter interceptions that helped Green Bay open up a 14-6 lead. The first pick was an arm punt into double coverage, but at least had the cover of an apparent missed hold in the secondary he was trying to draw with the throw. The second was, well, just watch.

.@packers secondary with their second INT of the night!

On 3rd and forever, rather than trying to set up the Browns new kicker (who had already missed an extra point) with an easier kick, Mayfield overthrew a hitch route with some poor footwork and kept Cleveland from any chance of getting points. This led to a lot of frustrated tweets from Browns fans, as well as safety John Johnson III, who was inactive for the game and at his house, likewise growing frustrated watching Mayfield take the chance for points off the board. His message was simple: RUN THE DAMN BALL.

It’s a common refrain from Browns fans (and, really, any other team with a struggling QB), who would prefer to see Nick Chubb get more touches as that is a far safer plan that Mayfield slinging it. However, it’s for the best at least early that Kevin Stefanski didn’t heed his safety’s advice in total, as on the next drive Mayfield led the Browns to another touchdown to pull to 14-12.

.@bakermayfield finds @hbryant17 in the end zone for 6! #Browns

It’s always fascinating when players are injured or out with illness and are live-tweet games from home, because every once in awhile they fire something off like this that is exactly in lockstep with the fans. The Browns defense has seen plenty of this from the sidelines this season — Myles Garrett said their answer has to be trying to score points off turnovers themselves as a defense to help out — they just can’t tweet from there, so Johnson gave us a unique glimpse into that frustration on Christmas.

UPDATE: He threw a third, arguably even worse pick on the very next drive.

3 interceptions for Baker Mayfield in the 1st half of tonight’s game. pic.twitter.com/0WlLuWt2nK

Sarcasm and humiliation have no place in teaching