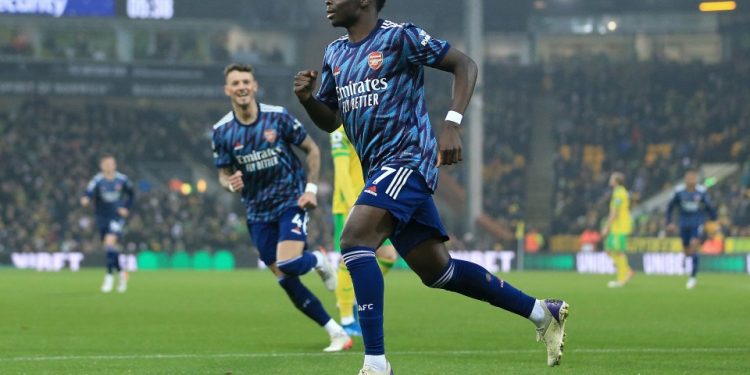 Bukayo Saka was the star of the show as he netted twice in a 5-0 win for Arsenal over Norwich City.

Kieran Tierney, Alexandre Lacazette and Emile Smith Rowe also scored as Mikel Arteta’s side made it three successive wins in the Premier League.

Saka opened the scoring for the Gunners in a straightforward winGetty

It was always going to be a tall order for the Canaries coming up against the one of the top-flight’s in form sides, but they did not help themselves by conceding early on.

Norwich centre-back and former Liverpool loanee Ozan Kabak gave the ball away and in typical fashion, the Gunners were ruthless.

Martin Odegaard received the ball centre of the goal from Gabriel Martinelli who moved the ball right to the England winger who unleashed a fine left footed strike into the bottom left corner past goalkeeper Angus Gunn.

As good as the goal was, former Arsenal left-winger Perry Groves on commentary for talkSPORT 2 was not impressed with the defending.

“Really sloppy play from Norwich, [Ozan] Kabak gives the ball away, [Brandon] Williams has to get closer to Saka, he can’t let him shoot, he has to show him outside,” Groves said.

“All around from Norwich, sloppy defending, got to get tighter.”

Whilst the score line didn’t get any worse for a while, Norwich still rarely threatened the Gunners goal and it was just a matter of time before the visitors made it 2-0.

They inevitably did as Odegaard was heavily involved again, this time picking the ball up in the centre of midfield before threading a fine pass into the left channel for Tierney to run on to it and then coolly slotting it past Gunn.

The second half was an exhibition of sorts, the hosts looked defeated and Arsenal were seeing the game out until the last 25 minutes where Arteta’s side flexed their muscles again.

The goal was reminiscent of the Arsenal under Arsene Wenger, fine passing and a clinical touch at the endGetty

Saka secured his first brace of the season and in doing so produced a strike that was almost a replica of his first.

Slightly further out this time, The Arsenal academy product cut inside Williams again before finding the bottom left for the second time.

Whilst lauding the goal, Groves though again was not happy with the defending.

“That is a goal of top quality from Saka, Tierney into Odegaard, into Lacazette who lays it right to Saka.

“Again Brandon Williams, letting him cut inside, its a top top goal from Saka but again Williams has to get closer.”

As if Norwich thought their day couldn’t get any worse, it did, as late goals from captain Lacazette via the penalty spot and Smith Rowe, his third in as many games after coming off from the bench made it 5-0 to the Gunners.

Days like today won’t define whether Norwich stay up or not but losing heavily does have a significant impact on goal difference which could prove to be crucial come the end of the season.