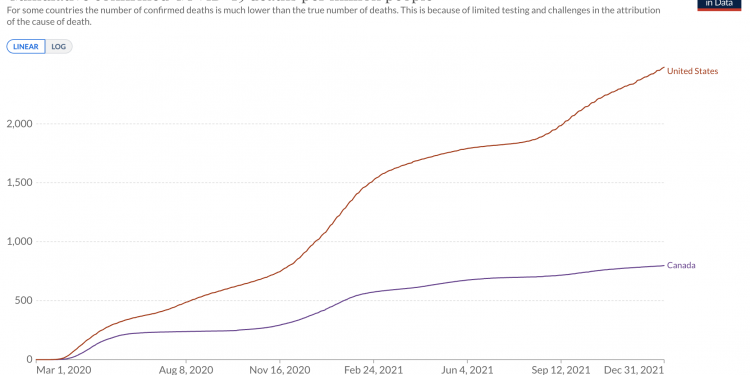 We travelled to the US over Christmas to see our children and our new grandchild. We were struck by the profound differences between Canada and the US in how the pandemic has played out, and I want to reflect on them here.

Canada is far from perfect, but in Ottawa, at least, people in stores are uniformly masked. You need to show proof of vaccination to board a plane or enter a theatre or restaurant. Regulations tighten quickly during epidemic waves. Most people still respect 2-meter social distancing. We had large groups of unmasked people crowding into elevators in the US. What the hell were they thinking?

Perhaps I’m oversensitive. I am 68 and a cancer patient, so I am at high risk from COVID. Not, however, because cancer has made me immunocompromised. My immune system holds my tumour at bay, thanks to immunotherapy. The problem is that severe COVID can lead to bacterial lung infections. I can’t take antibiotics while I take my immunotherapeutic medication. Therefore, if I got COVID-related pneumonia, I’d have to stop the immunotherapy, unleashing my tumour.

So, let’s talk about what the US and Canada have experienced during the pandemic. On March 3rd, 2020, David States, Nick Bagley, and I posted some projections for the possible course of the pandemic in the US. Applying elementary epidemiological models to the early data from Wuhan, we predicted that the US would experience somewhere between 0.5 and 1 million deaths. Many derided our projection, which was far higher than some others at that time. For example, two weeks after we published, law professor Richard Epstein predicted 500 US deaths.*

Sadly, we were correct. On New Year’s Day, 2022, the cumulative total American COVID deaths was 825,536. This is more than twice the number of American casualties in the Second World War. More Americans have died of COVID than AIDS in the 40 years since the latter was identified.

Canada had experienced 30,377 deaths on New Year’s Day. The US has a much bigger population, so let’s convert these numbers to deaths/1,000,000 population. For the entire epidemic, America has a rate of 2,494 COVID deaths per million compared to 805 Canadian deaths. That means there have been 3.1 American deaths for each Canadian death. Here is how these deaths have accumulated throughout the pandemic.

Cumulative Deaths from COVID: US vs Canada

Suppose that, contrary to fact, Americans had died of COVID at the same rate as Canadians. How many American deaths would have occurred? If you multiply the American population by the Canadian rate, you get 266,409 deaths. This suggests that there have been 825,536 – 266,409 = 559,127 excess deaths in the US, relative to the counterfactual of a ‘Canadian’ pandemic.† This staggering number requires an explanation.

Unfortunately, it’s hard to say why Canada has suffered so much less. Some apparent differences between the two countries probably don’t matter. Canada is colder, but respiratory viruses often thrive in cold climates. Viruses also spread more easily in crowded environments. Canada has a much lower population density than the US; if that is, you calculate that density by dividing the total population by the entire landmass. But that can’t be the right way to do it. The proportions of city dwellers are about the same in the two countries. It is impossible to get infected in most of Canada because it is utterly uninhabited. It’s not clear that the average Canadian is less exposed to her neighbours than an American.§

Canadians have, however, adopted and accepted more stringent pandemic control measures than Americans.

How stringent are the pandemic control measures in the US and Canada?

And, despite a slow start, more Canadians are fully vaccinated.

Rates of Full Vaccination, US vs Canada.

Surprisingly, Canada’s stringent control measures and higher vaccination rate have not resulted in a consistently lower value of the coronavirus’s effective reproduction rate (that’s R, not R0) relative to the US. Notice, however, that the initial spread in the US was substantially faster for unknown reasons. As a result, it might be that the number of US COVID cases/1,000,000 in early March was markedly greater than in Canada. In an exponential growth process, that greater initial size of the infected population would produce higher daily US new cases/1,000,000 throughout the pandemic.

The Effective Reproduction Rate: US vs Canada.

Interestingly, the case fatality rate — the proportion of individuals with COVID who die — has usually been greater in the US, starting about the beginning of 2021. Why? Canadian vaccination rates might contribute to this, but notice that the difference isn’t consistent, and it precedes widespread vaccination in Canada. Canada, however, has universal health care. Perhaps universal health insurance means that Canadians with COVID have been more willing to get tested and seek health care earlier in the course of their illnesses? Getting earlier COVID treatment might lead to less severe disease and a lower fatality rate.

The Log of the Case Fatality Rate: US vs Canada

So, I don’t know what specific factors account for the differences between the US and Canadian pandemic death rates. Until we know that, I believe that the package of COVID policies we have adopted here in Canada makes sense, acknowledging that hindsight will likely show that some of the specific policies in that package were unnecessary.

I get it that America is a libertarian culture and that you are willing to pay a price for that freedom (as you understand it). Some other time, let’s talk about striking a balance between individual liberty and the common good. But I ask you, even by your lights, was living without vaccine mandates worth half a million deaths?

*A month later, Epstein said that 500 was a typo, and he had meant to predict 5,000 deaths. This is two orders of magnitude smaller than what happened.

†A better calculation would account for the differences in the age structures of the American and Canadian populations. The proportion of the population 65 and older is slightly larger in Canada than in the US. Because the COVID case fatality rate is so much higher among the elderly, correcting it would make the Canadian death rate look better and the US death rate worse.

§A better way to measure the population density relevant to coronavirus transmission would be to compare the number of neighbours living in, say, a 1 km radius disc surrounding the average citizen in each country. I can’t find that statistic, but it’s possible that the average American’s neighbourhood is more crowded than the average Canadian’s. I’m skeptical that this difference, if it exists, would be sufficient to explain a threefold difference in the cumulative pandemic death rates.

Many thanks to Our World in Data for their extraordinary work curating and visualizing these data.