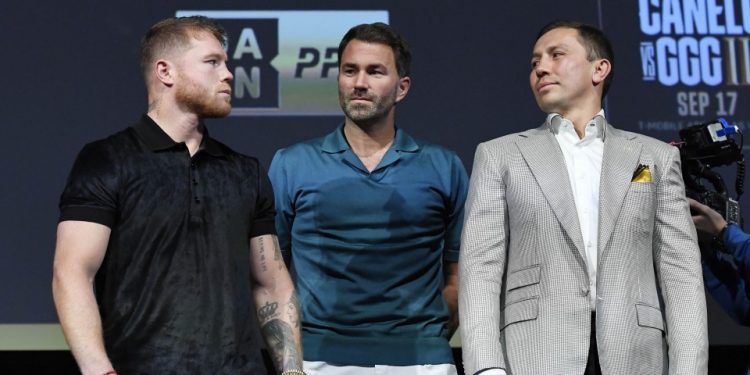 There was no love lost between Canelo Alvarez and Gennady Golovkin, as the pair exchanged verbal blows at their press conference.

Despite it having been almost four years since the rivals last met in the ring, it is clear that the animosity between them has not subsided at all, as they prepare to engage in a trilogy fight on September 17 in Las Vegas.

At yesterday’s press conference, Canelo made his feelings towards Golovkin very clear.

When asked whether he wanted to punish Golovkin in the ring, Canelo replied, “Yeah. So hard. Because he always talks about me, talks a lot of s*** about me…

“He always talks about me. Maybe he wants the last payday for his life, right? He’s got it.”

Golovkin was more subdued, as is typical of the Kazakh who prefers to let his fists do the talking.

With that being said, he did have a response for Canelo claiming that this was his final payday, simply saying, “Funny guy”.

Mayweather vs McGregor 1: More than $600m and the most valuable belt ever made

The previous two encounters between Canelo and Golovkin have been epic, with the first fight ending in a split decision draw, while the rematch went the Mexican’s way by majority decision, although both results were hotly contested by fans and media alike.

At the time, both men were on the top of their game, but since then circumstances have changed a little.

Canelo has looked unstoppable in recent years tearing his way through the weight divisions and even becoming undisputed super middleweight champion, but in his most recent outing, his winning streak was halted by Dmitry Bivol and now the Mexican will be looking to bounce back in style.

As for Golovkin, he is now 40 years old and he has not been particularly active of late, only fighting four times in the last four years, but he is as powerful as ever, which he showed in his last fight by knocking out Ryota Murata.