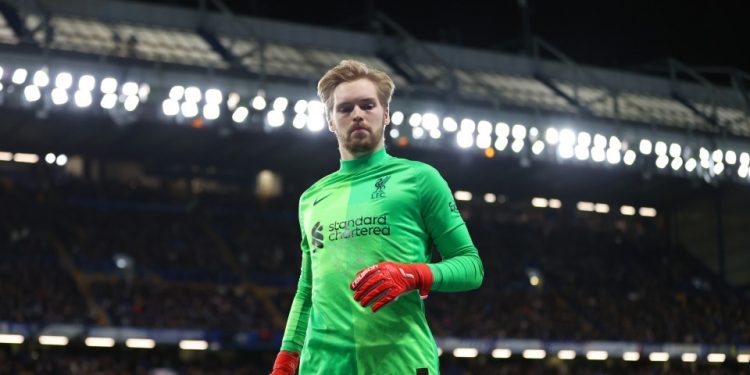 Former Republic of Ireland goalkeeper Shay Given advised Liverpool’s Caoimhin Kelleher to seek a loan move away from Liverpool.

Kelleher is currently the Reds’ second-choice goalkeeper and holds the same position with Irish national team.

Kelleher is approaching a crossroad in his careerGetty

The 23-year-old goalkeeper has featured six times for the Reds’ in all competitions this season.

Two of those appearances have been in the last week, deputising for Alisson Becker in their 2-2 against Chelsea and their FA Cup win over Shrewsbury.

But when the Brazilian goalkeeper returns to fitness Kelleher’s first-team chances at Anfield will again be limited.

And Given believes a loan move would give him the perfect opportunity to become a better player and able to fight for the No.1 jersey for club and country.

Kelleher did well against Chelsea for LiverpoolGetty

“He’s 23 years old, I’m trying to bring myself back to when I was that age and I’m not sure how many games I would have played, but I think he has only played ten or 11 games,” he told Premier Sport.

“He’s not a kid anymore, 23 is an age where I think he should be playing regular first team football.

“The biggest problem he has is that Alisson is ahead of him. Alisson is in the prime of his life and could be for the next five or six years.

“Does Kelleher sit there and be happy as a number two? They’ve got Adrian who can sit on the bench and back Alisson up.

Kelleher needs to act now or risk hindering his own developmentAFP

“For me, it’s so important to play games. He has been training there for a few years and signed a new five-year contract last summer, so he is part of the club’s long-term future.

“Even from a Liverpool point of view, they need to get him out playing, get him that experience, then bring him back and get him challenging Alisson.

“If it was me, I’d be knocking Klopp’s door down, I really would. I’d be saying that I need to go out on loan, go and play. January is a time to do that, I’d be on to my agent and manager to get me playing games.

“It’s not just at Liverpool, he’s got [Gavin] Bazunu at Ireland as well. He is only 19-years old and has played 50 club games, Kelleher has played around ten…

“I think for all parties concerned the best thing would be to go on loan. I think he’s good enough to play in the first team, he’s a really good goalkeeper. I think he wants to show people that.”