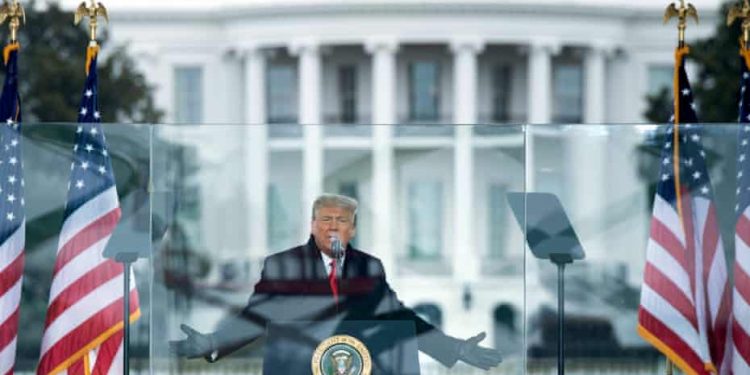 Congressman Bennie Thompson, the chairman of the House select committee investigating the Capitol attack, has said the panel will open an inquiry into Donald Trump’s phone call seeking to stop Joe Biden’s certification from taking place on 6 January hours before the insurrection.

The chairman said the select committee intended to scrutinize the phone call – revealed last month by the Guardian – should they prevail in their legal effort to obtain Trump White House records over the former president’s objections of executive privilege.

“That’s right,” Thompson said when asked by the Guardian whether the select committee would look into Trump’s phone call, and suggested House investigators had already started to consider ways to investigate Trump’s demand that Biden not be certified as president on 6 January.

Thompson said the select committee could not ask the National Archives for records about specific calls, but noted “if we say we want all White House calls made on January 5 and 6, if he made it on a White House phone, then obviously we would look at it there.”

The Guardian reported last month that Trump, according to multiple sources, called lieutenants based at the Willard hotel in Washington DC from the White House in the late hours of 5 January and sought ways to stop Biden’s certification from taking place on 6 January.

Trump first told the lieutenants his vice-president, Mike Pence, was reluctant to go along with the plan to commandeer his ceremonial role at the joint session of Congress in a way that would allow Trump to retain the presidency for a second term, the sources said.

But as Trump relayed to them the situation with Pence, the sources said, on at least one call, he pressed his lieutenants about how to stop Biden’s certification from taking place on 6 January in a scheme to get alternate slates of electors for Trump sent to Congress.

The former president’s remarks came as part of wider discussions he had with the lieutenants at the Willard – a team led by Trump lawyers Rudy Giuliani, John Eastman, Boris Epshteyn and Trump strategist Steve Bannon – about delaying the certification, the sources said.

House investigators in recent months have pursued an initial in into Trump’s contacts with lieutenants at the Willard, issuing a flurry of subpoenas compelling documents and testimony to crucial witnesses, including Bannon and Eastman.

But Thompson said that the select committee would now also investigate both the contents of Trump’s phone calls to the Willard and the White House’s potential involvement, in a move certain to intensify the pressure on the former president’s inner circle.

“If we get the information that we requested,” Thompson said of the select committee’s demands for records from the Trump White House and Trump aides, “those calls potentially will be reflected to the Willard hotel and whomever.”

A spokesperson for the select committee declined to comment about what else such a line of inquiry might involve. But a subpoena to Giuliani, the lead Trump lawyer at the Willard, is understood to be in the offing, according to a source familiar with the matter.

The Guardian reported that the night before the Capitol attack, Trump called the lawyers and non-lawyers at the Willard separately, because Giuliani did not want to have non-lawyers participate on sensitive calls and jeopardize claims to attorney-client privilege.

It was not clear whether Giulaini might invoke attorney-client privilege as a way to escape cooperating with the investigation in the event of a subpoena, but Congressman Jamie Raskin, a member of the select committee, noted the protection does not confer broad immunity.

“The attorney-client privilege does not operate to shield participants in a crime from an investigation into a crime,” Raskin said. “If it did, then all you would have to do to rob a bank is bring a lawyer with you, and be asking for advice along the way.”

The Guardian also reported Trump made several calls the day before the Capitol attack from both the White House residence, his preferred place to work, as well as the West Wing, but it was not certain from which location he phoned his top lieutenants at the Willard.

The distinction is significant as phone calls placed from the White House residence, even from a landline desk phone, are not automatically memorialized in records sent to the National Archives after the end of an administration.

That means even if the select committee succeeds in its litigation to pry free Trump’s call detail records from the National Archives, without testimony from people with knowledge of what was said, House investigators might only learn the target and time of the calls.