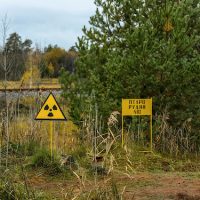 As we learn more about the negligence of Russian generals who ignored warnings that the radioactive forest surrounding Chornobyl was a hazardous staging ground for their assault on Kyiv, environmental historian Kate Brown flags an ill-recognized reality: humanity is ill prepared for what happens when nuclear facilities are held hostage during war.

Known as the “Red Forest”—its pine trees turned red from radiation exposure after a reactor at Chornobyl melted down in April 1986—the area where Russian soldiers bulldozed and dug trenches and bunkers is the most contaminated region of the Chornobyl Exclusion Zone, which is itself “one of the most toxic places on Earth,” writes the New York Times.

But Russian generals did not seem troubled by the fact that their troops were digging and bunking down in earthworks that may have had radiation levels 1,000 times above ambient.

“We told them not to do it, that it was dangerous, but they ignored us,” Valeriy Simyonov, the chief safety engineer for the Chornobyl nuclear site, told the Times.

Simyonov added that while experts from Russia’s state nuclear power company Rosatom were onsite, the generals appear to have ignored them as well.

“They came and did whatever they wanted,” Mr. Simyonov said.

Such recklessness included using bulldozers to turn the Red Forest into a warren of trenches and bunkers: a basecamp from which to attempt their assault on Kyiv, as well as a fallback point when that assault failed.

Ukrainian Chornobyl Zone Management Agency spokesperson Kateryna Pavlova told the Times the invading army’s tanks were a particular hazard, as their treads would have churned up the radioactive soil and then carried it forward into Belarus and Russia itself.

While fears that a prolonged power cut to a cooling pool holding spent nuclear rods could lead to fire were not realized, the Russian soldiers who “apparently camped out for weeks in the radioactive forest” may fare very badly indeed. They “voluntarily received such doses of radiation that the consequences will be explained to them by doctors in special protective suits,” Ukraine Deputy Prime Minister Iryna Vereshchuk told the Associated Press as the last Russian troops left Chornobyl on March 31.

Two safety workers who were present throughout Russia’s occupation of the nuclear site told Reuters that Russian soldiers seemed ignorant of both the Chornobyl disaster and the significant residual dangers it posed. They said the soldiers did not even seem to know that Chornobyl had once been a nuclear power plant, and was now used to store spent fuel. All they had been told was that it was “‘critically important infrastructure.’”

Bruno Chareyron, laboratory director at CRIIRAD, a French group that monitors radiation risks, told the Times that while ambient radiation throughout most of the 18-mile Exclusion Zone “poses scant risk,” being “about equivalent to a high-altitude airplane flight,” the zone remains pockmarked with “invisible hot spots, some covering an acre or two, some just a few square yards.” Hunkered down in such a “hot spot,” a soldier “would be exposed every hour to what experts consider a safe limit for an entire year,” with radiation coming primarily from highly carcinogenic Cesium-137, Strontium-90, and various isotopes of Plutonium.

After drone footage showed a fire sweeping through the zone during its occupation, the Times adds that the Russian soldiers—mostly very young conscripts—were also likely exposed to radioactive smoke from radiation-saturated moss and trees, in addition to the radioactive dust disturbed by their digging activities.

While Ukrainian news agencies report Russian soldiers seeking treatment for radiation poisoning in Belarus, those reports have not been independently confirmed.

The Kremlin has yet to comment on any of the above.

“As they retreated from Chornobyl, Russian troops blew up a bridge in the exclusion zone and planted a dense maze of anti-personnel mines, trip wires, and booby traps around the defunct station,” reports the Times. Two Ukrainian soldiers have stepped on mines in the past week, according to the Ukrainian government agency that manages the site.

Conventional war poses a high risk to the safety and security of nuclear power stations, said Kate Brown, Thomas M. Siebel Distinguished Professor in the History of Science in the Science and Technology Studies program at MIT, in a wide-ranging interview with Science for the People.

The author of several well-received books, including Manual for Survival: A Chernobyl Guide to the Future, Brown said Russia’s month-long occupation of the nuclear site sent her combing through the manuals of both the International Atomic Energy Agency and the Nuclear Regulatory Commission to see if there were any “contingency plans for a war in a nuclearized zone.” The answer, in a word, is “no.”

“For all the decades of designing for nuclear emergency scenarios—and we really have to hold this thought for a moment—no one thought to imagine something so human and inevitable as conventional war in a nuclear country,” Brown said.

With Russia’s actions at Chornobyl and the Zaporizhzhia nuclear power station standing as an example, Brown described a “new military tactic that we haven’t seen before”. It’s a situation where an invader uses “captured nuclear installations like kings on a chessboard,” turning them into “safe havens” for weapons and soldiers, confident that those staffing the plant are unlikely to defensively engage in a dangerous firefight.

And then there is the problem of what Brown calls “nuclear land mines”— term that covers both formal waste disposal sites and high-radiation surroundings like the Red Forest—just waiting to go up in smoke, in the fog of war.