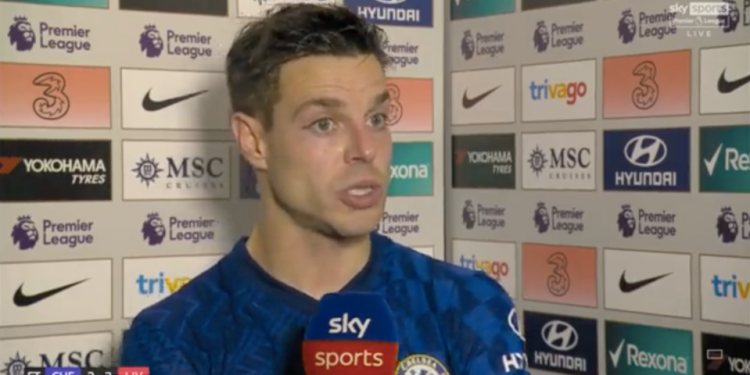 Cesar Azplicueta is adamant Sadio Mane should have been sent off for his elbow on him just seconds into Chelsea’s 2-2 thriller with Liverpool at Stamford Bridge.

The Blues fought back from a two-goal deficit to claim a point after a stunning Mateo Kovacic strike and Christian Pulisic’s equaliser cancelled out Mane and Mohamed Salah’s early goals.

Azpilicueta is absolutely sure Mane should have been sent offSKY SPORTS

There were several moments of controversy throughout the match and arguably the biggest talking point came just six seconds in when Azpilicueta was elbowed by Mane in the opening play of the game.

Mane was booked but the Chelsea defender felt Liverpool should have been reduced to 10 men after being caught in the face by the Senegal forward.

The Spaniard told Sky Sports: “It is a clear red. I don’t mind if it is five seconds into the game or the first action.

“He doesn’t want to challenge, he doesn’t see the ball, he just wanted to lead with the elbow. I don’t understand. We are getting these decisions against us that could change the game.”

“We are getting decisions against us.”

Azpilicueta feels there is no consistency in decision-making by referees at present.

He told Sky Sports: “Always they will say what they think but I can’t understand (why) we are promoting the challenges in the Premier League (that are) 50-50.

“Sometimes we are seeing jokes of penalties and sometimes we see real dangerous actions and we don’t take action.

“Sometimes there are a few games where referees become soft in terms of penalties and red cards and then comes the opposite. We don’t see the consistency even within one game.”

Blues boss Tuchel echoed the sentiments of his captain, saying: “If you remember in the first game, with the same referee, how quickly they gave us the red card.

“I said why not take the time to check it. I’m not a friend of early red cards and I hate to say it, because I love Mane and he should always be on the pitch because he’s a nice guy and a top player.