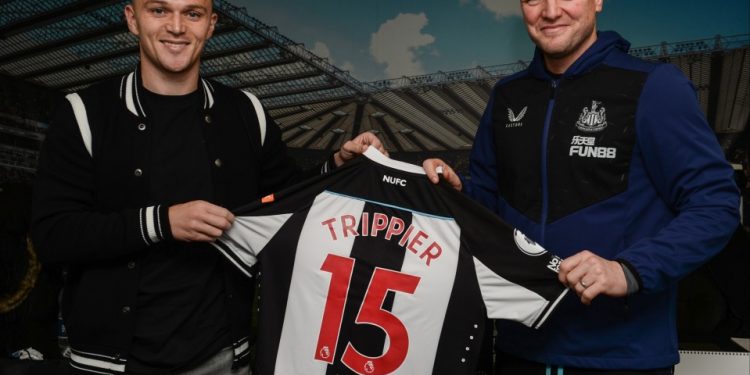 Newcastle’s new owners are making moves in the January transfer market as they bid to keep the club in the Premier League.

The Saudi-led group are flexing their financial muscles and have already added Kieran Trippier from Atletico Madrid for £25million.

Howe has already added Trippier to his Newcastle squadGetty

His debut did not go quite to plan as Eddie Howe’s side lost 1-0 to Cambridge in the FA Cup third round.

Trippier’s move will likely be the first of a number of incomings to the North East club as they look to preserve Premier League status.

talkSPORT understands that Chris Wood is set to undergo a medical at Newcastle ahead of a move from relegation rivals Burnley.

Wood has scored double digit Premier League goals in the last four seasons. His move would both weaken Sean Dyche’s side while also adding more goals in Callum Wilson’s absence.

Another defender will also likely be on Howe’s wish list with talks said to be ongoing with Lille for Dutch centre-back Sven Botman.

talkSPORT understands that the player is keen on a move to the North East, but they would likely have to pay more than their £40million club record fee they paid for Joelinton in 2019.

Newcastle have also been linked with a move for former Manchester United and Everton midfielder Marouane Fellaini.

Botman, 21, is understood to be liking social media posts linking him with NewcastleGetty

The Belgium midfielder is currently at Chinese side Shandong Luneng, and is also attracting interest from clubs in Dubai, Qatar and Turkey.

Here is how Howe’s side could line-up if all the targets join.

How Newcastle could line-up if they land their January targets

Chris Wood would spearhead the attack in Wilson’s absence, having scored 53 Premier League goals since joining Burnley in 2017.

Saint-Maximin, who has four Premier League goals and three assists this season, has been their star this season playing on the left.

Joelinton has impressed in recent games playing in midfielder alongside Jonjo Shelvey and Marouane Fellaini could slot in alongside them.

Miguel Almiron has often played on the right for Newcastle this season, with Ryan Fraser also an option.

Trippier immediately became first choice right-back after signing and Botman would likely go straight into the side alongside Jamal Lascelles and Javier Manquillo.