Colonialism: why leading climate scientists have finally acknowledged its link with climate change 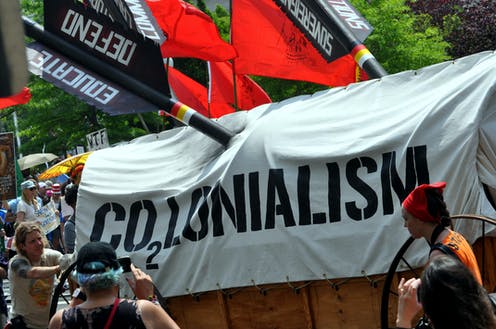 Campaigners have long argued for recognising colonialism as a climate-shaping force. Edward Kimmel/Wikimedia

The International Panel on Climate Change (IPCC)‘s sixth and latest report on the impact of global warming on our planet, published earlier this month, reiterates many of its predecessors’ warnings: chiefly that climate change threatens global disaster if we do not act to avert it. Yet it contains one key difference. For the first time in the institution’s history, the IPCC has included the term “colonialism” in its report’s summary.

The IPCC has been producing scientific reports on climate change since 1990. But in its more than 30 years of analysis, it has never yet discussed the connections between climate change and colonialism: until now.

The addition of one new term to the IPCC’s lexicon might not seem significant. But colonialism is a deeply complex word. Referring to the practice of acquiring full or partial control over another group’s territory, it can include the occupation of that land by settlers as well as the economic exploitation of land to benefit the colonising group.

In Australia, where I come from, British colonists invaded Aboriginal people’s land in the late 18th century and have since worked to establish a permanent settlement there. This was not a peaceful process. It involved violent acts of dispossession including widespread massacres of Aboriginal and Torres Strait Islander people, the forced removal of those people from their land, and the forced separation of children from their families.

Connecting climate change to such acts of colonisation involves recognising that historic injustices are not consigned to history: their legacies are alive in the present. Researchers have shown, for example, that the scale of bushfires in Australia today – including the catastrophic fires of 2019-20 – is not being exacerbated by climate change alone. It’s also amplified by the colonial displacement of Indigenous people from their lands and the disruption of their land management practices that skilfully used controlled burning to help landscapes flourish.

The spread of bushfires in Australia has been influenced by preventing Indigenous people from managing their lands. Bertknot/Flickr, CC BY-SA

Several reasons stand out as to why the IPCC has finally chosen to acknowledge this link. The people most impacted by colonisation have campaigned for – and gained greater access to – the IPCC’s process of creating reports. Previous reports were critiqued for lacking authors from Indigenous groups and non-Western nations.

Read more: Colonialism was a disaster and the facts prove it

In the latest report, by contrast, about 44% of authors are from “developing countries and countries with economies in transition”, up from 37% in the previous report. Authors also come from more diverse disciplinary backgrounds, including anthropology, history and philosophy as well as science and economics.

Previous IPCC working groups have been criticised for their lack of diversity. John Englart/Flickr, CC BY-SA

There has also been a steadily growing body of literature demonstrating the connections between climate change and colonialism since the IPCC completed its fifth report in 2014. For example, Potawatomi philosopher and climate justice scholar Kyle Whyte is cited in the latest report for his research on direct links between dispossessing Indigenous people of their land and environmental damage.

Yet for all the significance of the IPCC’s new acknowledgement, it is only one part of the latest report that develops this connection. IPCC reports are composed of three sections produced by different working groups. The first section assesses the physical science of climate change; the second covers the impacts of climate change; and the third deals with potential ways to lessen these effects. Only the second section discusses colonialism.

As a historian of climate knowledge, I’d argue that an analysis of colonialism should also be included in the first section covering climate science.

Research is increasingly showing that climate science is rooted in imperialism and colonialism. The historian Deborah R. Coen has shown that key elements of contemporary climate change science owe their origins to the imperial ambitions of the 19th century Habsburg Empire. It was Habsburg imperialist politics, for example, that helped scientists develop an understanding of the relationship between the development of local storms and atmospheric circulation.

What’s more, much of the historic meteorological data that contemporary climate scientists rely on was produced by colonising powers. Take the data extracted by scientists from the logbooks of mid-19th century English ships. This information was recorded as part of an effort to better connect territories colonised by the British Empire and speed up the exploitation of other people’s land and water.

Harriet Mercer is a member of the Making Climate History project, which receives funding from the Leverhulme Trust.