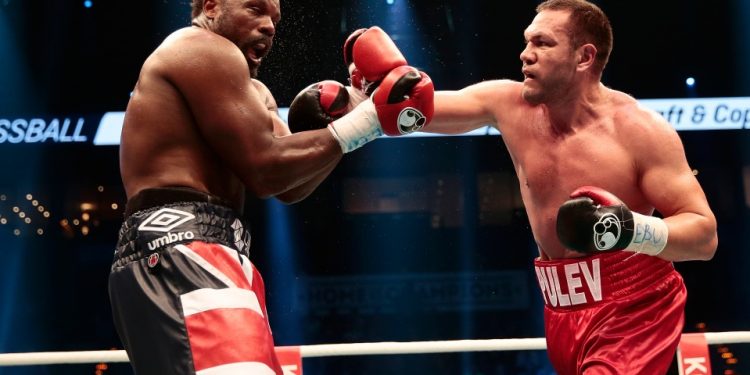 British boxing legend David Haye is backing his former foe Derek Chisora to avenge his defeat to Kubrat Pulev when they rematch at the O2 Arena in London tonight.

Pulev claimed a split decision victory over Chisora when they first fought in Hamburg in May 2016, but Haye thinks it will be much different this time around.

Pulev beat Chisora in a Heavyweight European Championship fight in 2016

‘The Hayemaker’, who will soon celebrate the 10-year anniversary of his knockout win over Chisora at West Ham United’s old home of Upton Park, explained what his compatriot must do to upset Pulev.

“Pulev has been in his comfort zone for a long time. He does everything behind the jab on his own terms and he needs a breather with his style,” Haye told Boxing Scene.

“If Derek can get inside him and force him to fight for every minute of every round, he can grind him down and stop him late. But Derek will have to be in supreme shape and he can’t be eating that jab.

“If he can’t get around the jab in the first couple of rounds it is going to be a very difficult fight for Derek. But he knows it, he is aware of what needs to be done.”

Chisora and Pulev are both veterans of the heavyweight divisionGetty

Chisora reveals the hardest puncher he’s ever faced and it’s not Fury, Whyte or Haye

Elle of a punch

The retired former cruiserweight and heavyweight boxing champion thinks Chisora could secure himself a shot at a world title if he beats Pulev.

“I’m not sure if it would count as an upset, but this would be a massive win that would catapult him up in the rankings and if you are a champion who is looking to make a voluntary defence, a heavyweight who fills up the O2 is not a bad option,” Haye said.

Haye and Chisora have had an incredible relationship throughout the years.

The two men were involved in a press conference brawl after Chisora had lost to Vitali Klitschko in Germany.

Haye and Chisora were separated by a steel fence at their pre-fight press conference.

The event was a stain on the sport of boxing but ultimately led to an eagerly anticipated grudge match.

Haye stopped the then 28-year-old Chisora in the fifth round in 2012 and has since called it a career after suffering back-to-back defeats against Tony Bellew.

In 2018, Chisora named Haye, the man who once ‘glassed’ him during a press conference, as his new manager. The pair enjoyed three years together before announcing their amicable split in 2021

Despite parting ways, it appears the two are still on good terms and Haye will be hoping Chisora can make his Pulev fight prediction come true in London tonight.