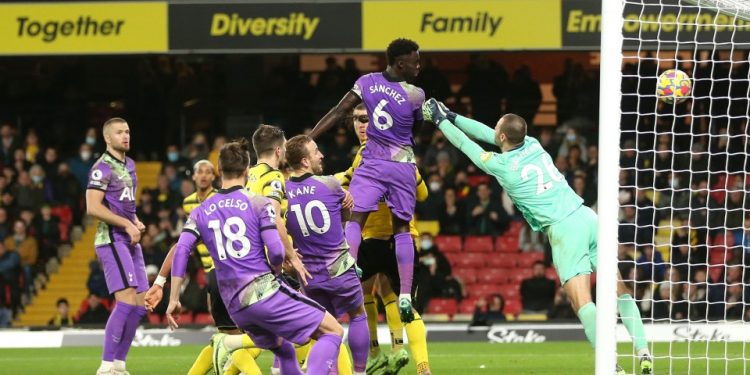 Tottenham centre-back Davinson Sanchez struck in added time on New Year’s Day to hand his side a late 1-0 win over Watford in the Premier League.

Sanchez rose highest to score a huge goal for SpursGetty

Spurs knew they had to react well after dropping points in midweek against Southampton.

If they thought the relegation-threatened Hornets were going to roll over for them, though, they were sadly mistaken.

Claudio Ranieri’s side were camped out in their own penalty area for the majority of the game but produced an excellent rearguard display to deny their opponents until they dying seconds.

Goalkeeper Daniel Bachmann was in stunning form but he was finally beaten when Sanchez directed a Son free-kick past him.

Bachmann did superbly throughout and this save denied Sergio ReguilonAFP

Bar a low strike from Kem Sema, it was a case of attack vs defence in the opening stages as Tottenham attempted to break down the Hornets’ well-drilled defence.

Spurs failed to create clear-cut chances though and their best opportunities came when Pierre-Emile Hojbjerg lashed a half-volley over the bar and Sergio Reguilon forced Daniel Bachmann into a fine save.

Crosses flew into the penalty area at Vicarage Road but no delivery really tested the Watford defence – in the air or on the floor.

Tottenham’s most likely way of breaking the deadlock looked to be from an error from their opponents.

They were gifted a glorious change on the half-hour mark but when Oliver Skipp’s brilliant pressure forced the ball to Kane, who curled wide instead of passing to Heung-Min Son.

Kane had several good chances during the gameGetty

Watford attempted to stop Spurs by hook or by crook and some physical defending from Adam Masina and Juraj Kucka certainly raised some eyebrows in the penalty area.

The hosts swapped Emmanuel Dennis for Joao Pedro at half-time in a bid to improve their chances on the counter, but still Spurs were the more dominant overall.

Lucas Moura and Reguilon had more efforts on goal and Bachmann turned over a drive from Kane which he battled hard to fire in.

Hugo Lloris was a spectator throughout but when called upon he showed why Antonio Conte wants him to stay by flicking a Josh King shot wide of the post.

Spurs then came into another bit of luck when referee Robert Jones pulled back play for a foul on Joao Pedro just as he’d found his way into the box and beyond Skipp and Sanchez.

The resulting free-kick was taken by the Brazil but he fired into the fans when he should have done much better.

Conte will still want to improve despite the winGetty

Son twice should have broken the deadlock but first his back-heel was well wide but the second, an excellent shot on the turn, produced another top save from Bachmann.

At the other end, Lloris clashed with Pedro in the box but he just got a touch on the ball as he clattered the player.

The end of the match was delayed with a medical emergency in the stand and play resumed minutes later after Watford medics helped attend to the situation.

But after the game got back under way there was a final twist in the tale.

A free-kick on the left flank was whipped into the near post by Son and Sanchez, with his fourth league goal for the club, gave Tottenham the win.

They move fifth as Conte now has 18 points from a possible 24 since taking charge of the club.

It’s now eigth unbeaten in the Premier League for the Italian but big tests against Arsenal and Chelsea are up next.