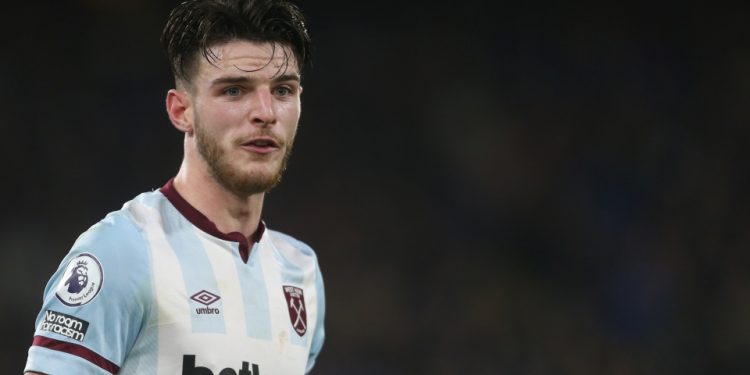 Declan Rice will not get to 200 Premier League appearances for West Ham, reckons Simon Jordan.

The 22-year-old made his 150th top-flight outing in Saturday’s win over Crystal Palace and appears to be loving life at the London Stadium under David Moyes.

The Hammers are sitting just a point off the Champions League spots, look strong in the Europa League, and recently received a substantial investment from Czech billionaire Daniel Kretinsky.

But despite the success West Ham are enjoying right now, Jordan believes they simply won’t be able to keep Rice for much longer given how impressive the midfielder has been for club and country.

Chelsea, Manchester City and Manchester United are all being talked about as potential contenders for the midfielder’s signature and Jordan envisages a £100million-plus transfer taking place in the not too distant future.

“He won’t make 200 appearances for West Ham,” said the former Crystal Palace chairman, speaking on the mid-morning show on talkSPORT with Jim White and Danny Murphy.

“That is not because West Ham isn’t a fertile ground for him to play good football at. It’s because someone will make a compelling offer to West Ham and – irrespective of the huge investment into the ownership of that club – they will sell him.

“It probably will be north of £100million because that is the ridiculous market place we are in.

“Where he goes is a debate between who pitches his agent and how that agent is pitched and what the opportinity exists looks like.

“That is not because I’m decrying that which is massive, it is because I am suggesting there are other clubs that are going to win things, rather than compete in the league and get into Europe.

“By the way, West Ham may well win the Europa League because they are setting their stall out to do it and there is an anticipation that they may go at that – and that is something to be celebrated.

“But when you have Manchester City, Chelsea and maybe Man United, you are talking about three teams who can set the room on fire economically and pretty much do what they want.

“While Man United can’t win anything currently, Man City and Chelsea currently can and do. So there is the answer to the question which direction of travel does he go in.”

Innovation in healthcare: ‘Emerging Europe is a gold mine of talent’

Central Asia braces for the worst as Taliban advances in Afghanistan