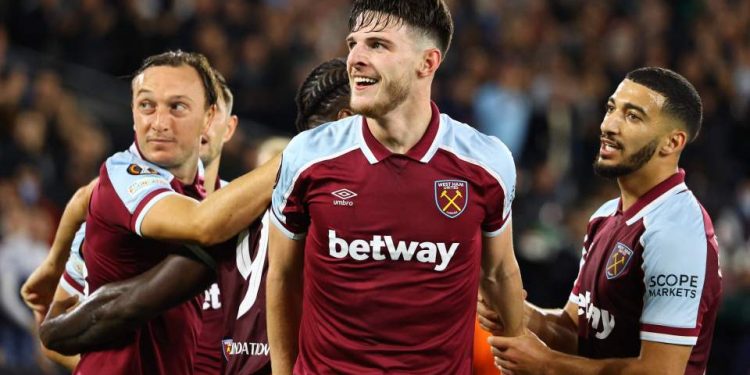 West Ham midfielder Declan Rice has been told it’s time to step up his all-round game to the level of Premier League greats Roy Keane and Paul Ince.

Rice has emerged as one of England’s best young talents during 2021, nailing down a place in Gareth Southgate’s Three Lions line up, and taking West Ham to new heights.

Rice is becoming formidable in the middle of the parkAFP

The 22-year-old started all seven of England’s matches in their run to the Euro 2020 final during the summer, while his club form saw West Ham finish sixth in the league, their highest standing since 1999.

In the Premier League he has already played 149 times for his club and his age – At 22 years and 348 days to be exact – will see him become the youngest player to reach 150 games after Mark Noble (25 years and 267 days).

Rice’s rise to one of the game’s top emerging midfielders has seen links to the likes of Chelsea and Manchester United, with price tags as steep at £100million even mooted.

And talkSPORT host Dean Saunders ran down what makes him such a formidable competitor in the middle of the park.

“Would I like to play in midfield against Declan Rice? No,” Saunders said.

“If it’s a scrap he’s up there for a scrap, I mean a second ball match, a scrappy match which is about getting to the ball first and winning the ball in the centre circle, he’ll be good at that.

“If it’s a box to box game where we’re going to run for 90 minutes catching the strikers up, catching the back four up, he looks fitter than me as well, it looks like he can do that.”

Rice is a nightmare for any opposition midfielderGetty

Saunders, though, earmarked the one area of improvement for Rice, and where he can be beaten in midfield battles.

He explained: “The only chance I’ve got of getting on top of him is, I might be a better footballer than him.

Rice is always looking for improvementGetty

“I’m starting to think at West Ham as if he’s getting a bit fed up sitting in front of the back four, he’s starting to drift everywhere now, maybe that’s why they’re letting a few goals in.”

Rice has previously revealed he models his game on Premier League greats Patrick Vieira and Yaya Toure, but Saunders suggested two other names that could see him elevate his game to an unplayable level.

Roy Keane was famously unplayable for United, and Rice could reach that levelGetty

“I think there’s a point where you have to say to Declan Rice, go and play like Roy Keane or Paul Ince, they just covered every blade of grass,” Saunders said.

West Ham are now winless in five since losing both of their first choice centre backs, Angelo Ogbonna and Kurt Zouma, to injury, but Saunders still had high praise for David Moyes’ men.

“I think when they’re all fit and they’re playing like they can play, this is as good a West Ham team as I’ve seen, ever,” he said.

“In my time I’ve not seen a better team that’s looking like they’re playing for the manager.”