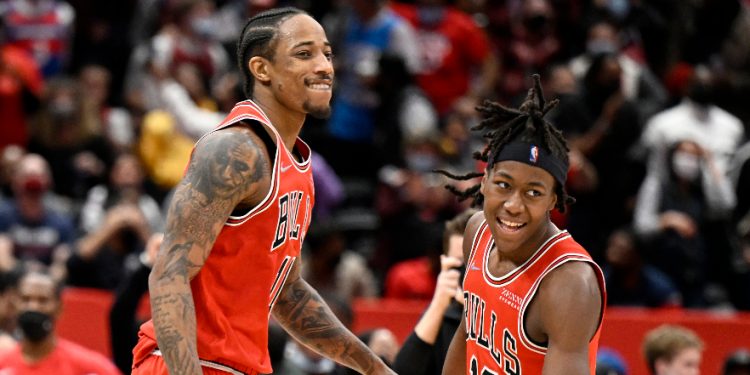 You’d be hard-pressed to find anyone at this point who thinks the Chicago Bulls made a mistake bringing in DeMar DeRozan this summer. One day after DeRozan capped off a win over the Indiana Pacers by hitting a walk-off, off-balance three-pointer as time expired, the standout guard hit yet another game-winning buzzer-beater from behind the arc.

Chicago found itself in a close game against the Washington Wizards, and after DeRozan hit a pair of free throws with less than a minute remaining to put the team up by one, the Wizards put the ball in Bradley Beal’s hands. Instead of trying to win it himself, though, Beal got the ball to Kyle Kuzma, who pulled up from deep and drilled a triple.

After a timeout to advance the ball, it seemed obvious that DeRozan was going to have the chance to go back-to-back. Washington understood this, tasking rookie guard Corey Kispert with staying attached to his hip, but the ball got into his hands, anyway. DeRozan was at an awkward spot in the corner, but after a dribble and a pump fake that got Kispert into the air, he was able to get a decent look. While Beal tried his best to contest, it didn’t matter, because DeRozan buried his jumper.

According to the fine folks at Basketball Reference, this was the first time anyone hit game-winning buzzer-beaters on back-to-back days in NBA history.

DeMar DeRozan is the first player in NBA history to hit a game-winning buzzer-beater in back-to-back days!