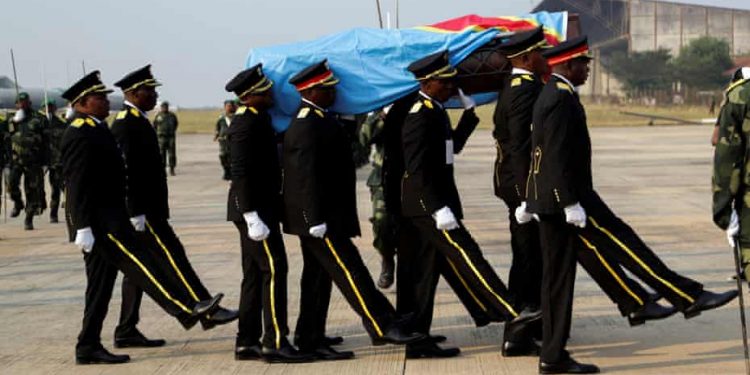 The family of the Democratic Republic of the Congo’s murdered independence hero, Patrice Lumumba, buried his only known remains – a tooth – in the capital, Kinshasa, on Thursday, 61 years after his death at the hands of Belgian-backed secessionist rebels.

Hundreds gathered in a vast square for the occasion, waving flags and looking upon a large photo of Lumumba, with his trademark horn-rimmed glasses and side-swept hair, framed by white flowers.

Lumumba was killed by a firing squad on 16 January 1961 in the south-eastern province of Katanga after being ousted as prime minister the previous year, all within months of DRC’s independence from Belgium.

A banner with the words “Many thanks, national hero” was suspended over the crowd, which included the president of neighbouring Republic of the Congo, Denis Sassou Nguesso, Belgium’s foreign minister and several African ambassadors.

“Finally the Congolese people can have the honour of offering a burial to their illustrious prime minister,” President Félix Tshisekedi said. “We are ending … mourning we started 61 years ago.”

The funeral was held on the 62nd anniversary of the central African country’s independence. On that day, Lumumba gave a fiery speech lambasting Belgium’s 75-year colonisation of Congo.

Congo’s first democratically elected prime minister, Lumumba alarmed the west with overtures to Moscow at the height of the cold war.

His government lasted just three months before he was overthrown and assassinated. Supporters and some historians accuse the CIA of involvement. A Belgian parliamentary investigation into Lumumba’s killing concluded in 2002 that Belgium was “morally responsible” for his death.

The body was never found. His only remaining tooth was reportedly taken by a Belgian police officer, Gerard Soete, who claimed to have dissolved much of the corpse in acid and burned the rest.

Belgium, whose King Philippe visited DRC for the first time this month, handed the tooth over to Lumumba’s family on 20 June.

“Your return home, the honours you are receiving here are a page of the history you continue to write,” said one of his granddaughters in a letter to Lumumba she read at the funeral. “With you, today, Africa is writing its own history.”

Is a Madagascan mine the first to offset its destruction of rainforest?