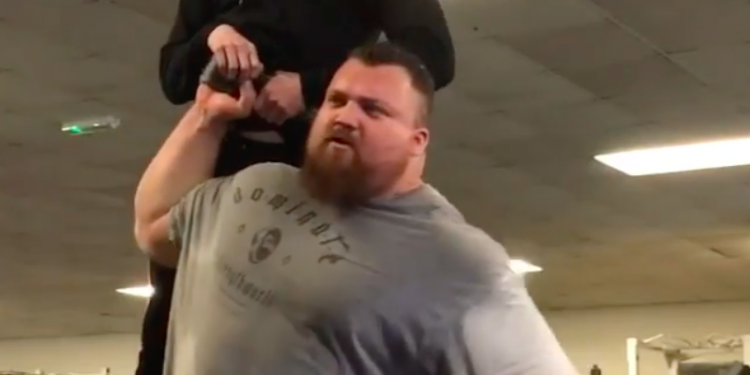 Eddie Hall showed off his unique training methods in a post on social media this week.

The former World’s Strongest Man posted a video on Instagram of him using a training partner to do some shoulder presses.

The Beast made it look easy as he completed a number of reps and used the hashtag #warmup in the caption.

And, seeing as the average man weighs around 13 stone [82.5kg] in the UK, that’s quite an im-press-ive feat.

Someone asked Hall: “Who’s got the strongest shoulders in Britain, Ed?”

He replied: “Who’s got the strongest shoulders in Britain? Hmmm, it’s a tough one. I don’t know, it’s really hard to think after doing such a light weight.”

Hall has been preparing to face his nemesis Hafthor Bjornsson in the boxing ring.

The two former World’s Strongest Men were due to settle their rivalry in September, but a bicep injury for The Beast meant that had to be pushed back.

It is now due to take place in March, but no official date has been confirmed as yet.

Hall has shed more than 40kg in preparation for the fight as he transformed his body from strongman to boxing ready.

His foe Thor has also undergone a similar transformation and his latest picture on Instagram showed just how ripped he is.

With a topless selfie, he captioned the picture: “Morning shape after 30 min run outside. What are you training today?”

The Mountain, as he is also known from the character he played in Game of Thrones, is currently in Scotland training with his coach.

In another post, he said: “I weighted (sic) 147kg day before my last fight. Should I lose more weight before I fight Eddie or come in heavier.

“My plan is to come in even more shredded and in much better overall shape!

“I don’t really care much about my weight to be honest. The only thing I care about is that I’ll be in a great shape and I’ll be able to prove people wrong.

“So many haters saying that I’ll gas out in first round. Guess we will find out soon.”