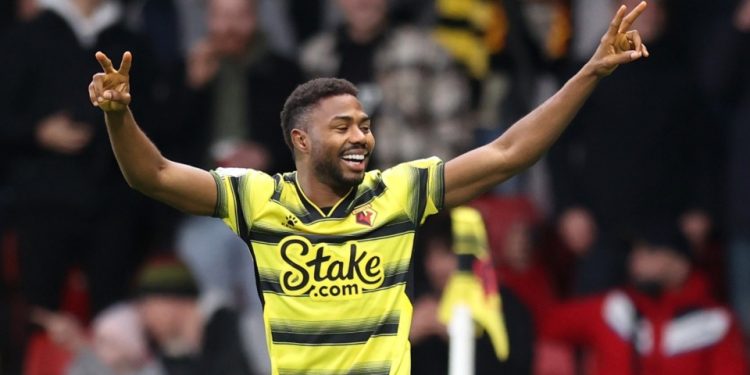 Emmanuel Dennis continues to prove why he was the bargain of the summer.

Watford paid Club Brugge just £4million for the striker in the summer, and he’s been integral ever since.

The 24-year-old netted his eighth goal of the season as he put Watford ahead against West Ham at Vicarage Road, before the Hammers hit back with a quick double.

That added to his five assists to make it 13 goal involvements in the Premier League so far this season.

Only one player has more than the Nigeria international, that is of course Liverpool ace Mohammed Salah.

The Egyptian has an unrivalled 24 to his name already this campaign.

Dennis has either scored or assisted 59 per cent of Watford’s 22 goals in the top flight this season.

He has also had a direct hand in 10 of the Hornets’ last 13 goals in the Premier League.

Manager Claudio Ranieri may be a little concerned about where goals are going to come from when Dennis leaves for the Africa Cup of Nations.

The striker was called up by Nigeria for the competition and will leave next week.

He will be available to face Tottenham on Saturday, before travelling for the competition alongside a host of top Premier League players.