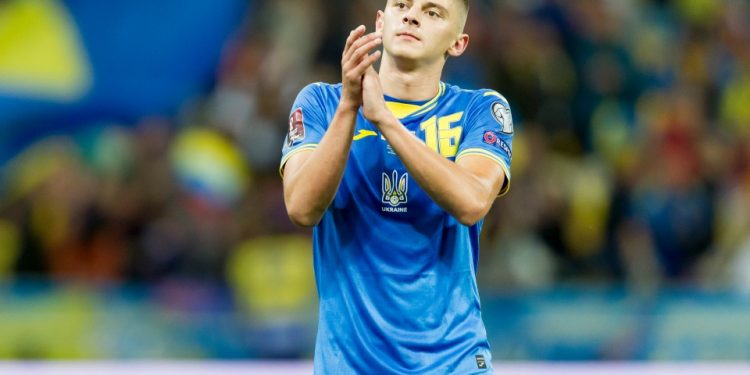 Everton are set to announce the signing of Ukrainian left-back Vitaliy Mykolenko, with his current Dynamo Kiev manager confirming a deal has been done with the Premier League club.

The 22-year-old looks set to make a £17million move to Merseyside in January, with major doubts over the future of current star Lucas Digne.

Mykolenko represented Ukraine at Euro 2020, helping his nation in their run to the quarter-finalsgetty

Dynamo boss Mircea Lucescu has confirmed the Ukraine international is on his way to Goodison Park.

He made the announcement by admitting he is ‘glad’ Mykolenko is leaving, but out of pride for how far he has come.

He also admits his exit will present an opportunity for other young aspiring stars to make their name at the club.

“I am glad that a young player from my team is now moving to Everton. I mean Mykolenko,” he spoke with UA Football.

“Another 18-19-year-old footballer will take his place. The rest in defence are 19-20 years old. Therefore, we continue to play as a very young team.

“They have to work much harder than experienced ones.”

Mykolenko has arrived as a potential replacement for Lucas Digne, who has gone from being one of Everton’s best players to being frozen out by current boss Rafa Benitez.

Reports have claimed Digne and Benitez’s relationship is ‘at the point of no return’ after a falling out between the player and manager.

This has led to Digne being dropped out of the squad, while he was reportedly sick in recent weeks.

Everton boss Benitez was recently asked about Digne’s illness, and said he felt the defender is not fully committed to the club.

“I have to be sure the players that will be there tomorrow want to be there, and they want to fight for the club and that’s it,” he said.

A potential return to Paris-Saint Germain looks likely if the right offer arrives in January, while Premier League rivals Newcastle and Leicester City have also been linked with an interest.

Another day, another EU fine for Poland