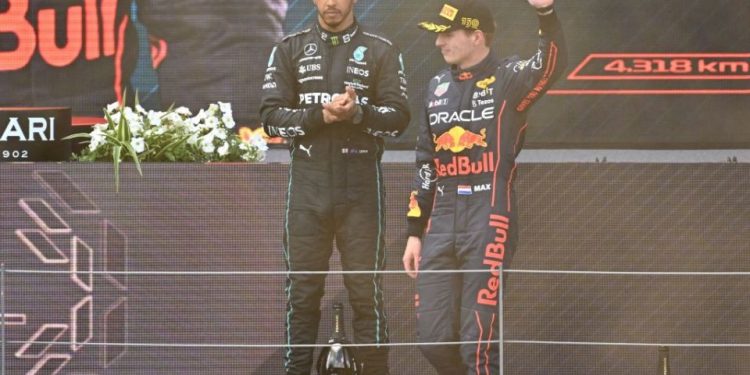 Max Verstappen has urged F1 fans to stop reacting like football supporters as the grid gets set for the France Grand Prix this weekend.

Motorsport has been marred by a series of hostile atmospheres in recent weeks and Verstappen was booed at Silverstone last month.

Hamilton and Verstappen were embroiled in a fierce rivalry last season

The Orange Army reacted by celebrating as Lewis Hamilton crashed during qualifying at the Red Bull Ring last time out in Austria.

But Verstappen implored fans in attendance to stop allowing the rivalry between Red Bull and Mercedes to spill over in the crowds.

“First of all, in every country, the fans in the grandstand decide the atmosphere,” Verstappen told F1-Insider.

“Those are the fans we consciously perceive, very loudly. I think on other parts of the track there is always a healthy mix between the individual fan groups.

“Basically, I think it’s a shame that the fans actually react like football fans. They always boo at the opponent.

“In the Netherlands they boo Lewis, in England me. I think it’s a pity because we often fight extremely tough, high-quality fights. You have to respect your opponent.

“I am a PSV fan. But when I watch a great football match, I enjoy it, whether my team wins or loses.

“It would be nice if fan behaviour in our sport was the same. And that, despite all the rivalry, opponents are also treated with respect.”

After several partisan crowds in Britain and then Austria, Verstappen may get his wish as the grid makes the trip to neutral France.

Hamilton and Verstappen have both received some rough fan treatmentGetty

The race weekend at the Circuit Paul Ricard is scheduled for Friday, July 22 to Sunday, July 24.

There will be two practices on Friday with the first starting from 1pm UK time with the third session an hour before on the Saturday.

Qualifying will take place at 3pm while the race itself will get underway at 2pm UK time on the Sunday.

Coverage will again be on Sky Sports F1 throughout the weekend. Their coverage of Sunday’s race build-up begins at 12:30pm.

If not, you can purchase a Sky Sports Day Pass from NowTV for £9.99 while Channel Four will broadcast highlights later in the evening.

talkSPORT will have all of the best of the action throughout the week while talkSPORT.com will have a live blog for the race.

To tune in to talkSPORT or talkSPORT 2 through the website, click HERE for the live stream. You can also listen via the talkSPORT app, on DAB digital radio, through your smart speaker and on 1089 or 1053 AM.

Hamilton, Verstappen and Leclerc get suspended €10,000 fines after Austrian GP

Leclerc’s gained ground on Verstappen in the last two racesAFP

France Grand Prix: What has been said?

“We’d expect them to be quick in [Paul] Ricard,” said Horner. “They’re showing flashes of being there or thereabouts.

“The last two races have been pretty decent for them. There’s been no sign, I think, of any porpoising at all.

“So they seem to be slowly bringing themselves back into the game.”

Female conductor takes the helm in first for Italian opera

Why is Ukraine still not in NATO?: Elsewhere in emerging Europe