Filling In a News Gap for Black West Virginians 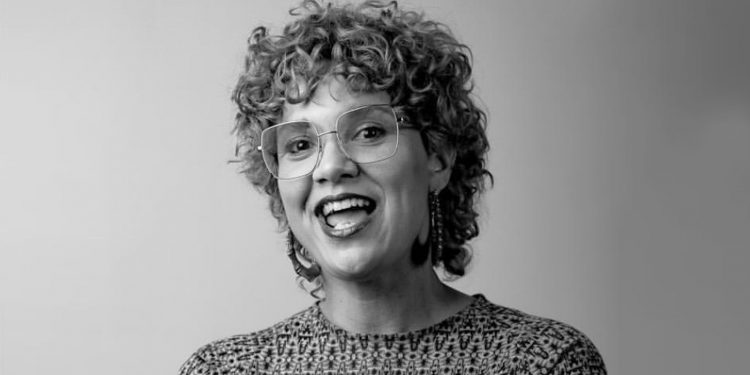 At first glance, Crystal Good’s resume may not paint her as an obvious candidate to become a newspaper publisher. Good spent years building a career as a poet, performer, and lobbyist in her home state of West Virginia.

“I’ve published a handful of bylines in my life,” she says. Yet, Good is the founder and publisher of Black By God: The West Virginian, a newspaper that Good says is by, for, and about the Black community in West Virginia, a state that is about 89% White.

Good, who is Black, has created this publication in response to the fact that, in 2019, West Virginia did not have a single outlet to serve its minority or ethnic populations. Even though “The Expanding News Desert,” a project from the University of North Carolina (UNC) Hussman School of Journalism and Media, has noted a rise in the number of new U.S. media offerings aimed at various ethnic groups, West Virginia was still a news desert for its Black community.

“Most of West Virginia culture is reflected through a White lens,” Good says.

That’s because “mainstream” culture is written with a White viewpoint and audience in mind, which creates a huge information gap for everyone who isn’t White.

West Virginia is currently home to 85 local newspapers, but the West Virginia Press Association counts only three Black journalists in the state.

To bridge those gaps, startup news organizations have been launched across the country, fueled by initial grants and funding from philanthropic foundations and news initiatives. Even as these new publications grow in both staff and readership, long-term sustainability remains in question.

The current media landscape serves the population who can pay for the news. That population is White, wealthy, and mostly liberal, according to Nikki Usher, author of News for the Rich, White, and Blue: How Place and Power Distort American Journalism.

“That’s dangerous,” Usher explains, “because it creates inequity in the stories that get told.”

“What we’re seeing is a filtering, or a clearing of the trough. When you’re separating curds and whey, you get excellent news for certain people and not so good news or misinformation for others,” she says.

But it also creates a profit incentive to steer published stories to wealthier demographics, she says.

“We know that liberals care about progressive social issues, and they want to be informed about them,” Usher says. “According to most polling numbers, they are more likely to actually support and pay for journalism. I think that there is a lot of White liberal guilt about not knowing ‘the other,’ and that’s a profit margin.”

Usher says we can see it happening in some national news outlets when it seems like they are trying to explain Black people to White people.

“You can see this in articles like ‘Why Black Women Don’t Want to Go Back to the Office,’” she says. Those articles serve a specific population.

But that’s not who Good is trying to serve with Black By God. The publication exists as an email and online newsletter that can also be downloaded as a PDF via Substack, along with an occasional print edition. In each of the formats in which it is released, it is making a move to bridge a massive information gap in the state’s larger news ecosystem. The assortment of formats offers the audience a variety of ways to engage with the publication and its brand as well as options at different price points.

West Virginia is currently home to 85 local newspapers, but the West Virginia Press Association counts only three Black journalists in the state. There have been just 14 Black-owned newspapers in the state in the past 150 years, and only two since 1950. The last one, the Beacon Digest of Charleston, shuttered in 2006.

Good’s motivation to build a newspaper for the Black community is rooted in her teenage ambition to own that last Black-owned newspaper. In 1991, when she was 17, she asked her father, who was working at WCHS-TV as one of the state’s only Black news directors, to reach out to the Beacon Digest to ask if Good could buy the paper. The paper was printing mostly wire stories and ads, she says, and she thought she could do a better job running it. Neither she nor her father had a lot of money at the time, but Good thought that if the Digest said yes, she could come up with the money somehow.

“They said no,” she says. “But at 17, I recognized you could do news differently.”

When the opportunity to learn different ways to do the news came her way, she took the leap. Good became a NewStart Fellow in Media Solutions and Innovation at the West Virginia University Reed College of Media. The NewStart Program helps newspaper owners and founders develop revenue streams to keep their publications profitable.

“We bring people into the program and teach them all the things they need to know to diversify revenue sources,” says Jim Iovino, an assistant professor at West Virginia University and leader of the program. “We teach them about media leadership. We teach them new ways that people are doing community journalism across the country. Also, we’re really trying to find a new level of sustainability.”

Throughout her time in the program, Good studied business models of different news startups. One that inspired her was NOISE Omaha in Nebraska, which has served the mostly Black community of North Omaha since April 2018, and which started out as a zine.

We’ve found that a lot of people who support, donate, and interact with us are White liberals

“The zine was our first product,” says Myles A. Davis, the organization’s president and executive director. “It was a cost-effective way to spread information.” NOISE Omaha distributes across social media and online platforms, as well as via radio and print editions, all as a way to make the news more accessible to its audience.

In June 2017, the Listening Post Collective, a team that offers tools, support, and learning opportunities to help revitalize local news across the U.S., conducted an assessment in North Omaha and discovered that the Black community there experienced an information gap. “They found that traditional media was not giving the community what they needed to thrive,” Davis says.

Prior to the formation of NOISE Omaha, The Omaha Star was the sole newspaper that served the Black community in the city, and it had done so for 80 years. The paper presents the African American community’s perspective, and is a veritable beacon of who’s who in the community, where they’re working, and who is rapidly becoming a local sports star. But Davis, pointing to an analysis of the Omaha market by the Listening Post Collective, saw a gap in the paper’s coverage that needed filling.

“The traditional media in the city is not really informing them on how to get involved civically, how to develop their communities, about jobs or education or housing or health,” Davis says. “We set out to start providing those things specifically for Black and Brown people. It also serves as education for Omaha residents as a whole, because everyone needs to be educated on these topics and how disproportionately North Omaha is affected in many ways.”

Although NOISE Omaha’s coverage is focused on the Black community, current donations reflect the premise of Usher’s book, coming mostly from a White liberal audience.

“We’ve found that a lot of people who support, donate, and interact with us are White liberals,” Davis says. “Most of our Instagram followers are White women.”

“That’s why we wanted to make a concerted effort to expand coverage” from who’s-who-style stories to more issue-focused pieces and explainers, Davis says. “The coverage serves and determines the audience and the support.”

NOISE Omaha is now experimenting with various funding strategies. It relies on a combination of individual donations and multiyear grants, which creates concerns about finding consistent, stable funding for long-term sustainability.

Many news startups struggle to build a steady revenue stream as they find their footing with their audiences. Philanthropic donations are helpful, especially at the launch, but at some point, independent publications have to sustain themselves and be just that: independent. They’re not owned by a deep-pocketed corporation or other organization. The goal is to not rely on any one revenue stream, but instead to create multiple ways to support themselves, including donations and memberships.

The media landscape has been shifting for years as newspapers struggle to adapt to online formats. According to the UNC’s reporting, from 2005 to 2020, more than one-fourth of newspapers in the United States disappeared. To “thwart the rise of news deserts”—areas without any local news coverage—a number of startup publications began to pop up across the nation, moving away from the old subscription- and ad-based models to newer membership ones. “But membership is just another way to say subscription,” Usher says. Both models offer access to content for a fee, but subscriptions are typically transactional, whereas memberships are invitations to join communities to which discounts and other perks are offered.

Davis hopes to find a way to grow NOISE Omaha so the publication isn’t “relying on people so affluent they can give out $300 million a year.” That’s not the audience NOISE Omaha serves, but that’s who is paying a significant portion of the bills right now, he says.

In West Virginia, Good also finds herself experimenting a lot in the organization’s startup phase.

“I’m building the restaurant and serving pepperoni rolls out the back window until we figure it out,” she says, drawing a metaphorical parallel to a distinctly West Virginian dish.

Figuring it out requires Good to listen to her local community and to other new media entrepreneurs.

“I’m gathering data from potential readers and the media landscape of West Virginia,” Good says. One challenge for Good is serving the poor population in a largely rural state where internet access is spotty. “Reaching people in a state where the average income is $23,000 is tough,” she says. “Who am I to ask people for money?”

“Places that can’t or won’t pay for news create challenges for news organizations,” Usher says. Asking people to pay a membership fee for access to stories that concern them can feel like a lot to ask when people’s budgets are stretched thin.

At the moment, Black By God is funded solely by Good and organizations that donated to her inaugural Juneteenth 2021 issue, for which she was also extended a line of credit from Doug Reynolds, the owner of several newspapers across West Virginia. Good is currently working through a program by Tiny News Collective, a national collaborative project that provides a stipend and access to tools to help build the publication’s infrastructure. Good at first charged $5 for a PDF version of the Juneteenth 2021 issue, but took down the paywall when she realized it was preventing people from reading it—only 20 people downloaded the issue. Since the paywall was removed, the issue has been downloaded 4,000 times across the state.

Good is looking for ways to gain greater visibility so the wider Black community in West Virginia can access Black By God. Her goal is to build a cost-effective platform while also developing the personality of the publication. In the process, Good hopes that Black By God can be a place to foster the talent of young Black journalists: “I want them to say, ‘I wrote my first byline for Black By God.’”

“Who reports the news is who shapes the narrative,” Usher says.