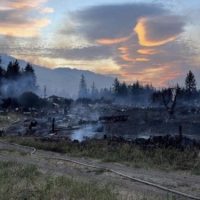 Firefighting crews lost ground Sunday after successfully holding back a blaze threatening the village of Lytton in southern British Columbia—barely one year after it was burned to the ground by a raging wildfire that took two lives and displaced hundreds of residents.

After nearly doubling in size on Friday, the Nohomin Creek wildfire, 1.7 kilometres northwest of the town, was being contained by firefighting crews, including several from the Lytton First Nation, reported CBC News.

But then, the fire “grew to 17 square kilometres Sunday afternoon—a nearly 14 per cent increase in size—despite being described by officials as ‘stable’ a day earlier,” the national broadcaster wrote.

Latest news had at least 10 structures burned and nearly 100 residents evacuated from the area.

“Growth has been observed up-slope on the west flank,” the B.C. Wildfire Service, CBC said on its website. Early in the weekend, ground crews and aerial resources were concentrating on on the south, east, and north flanks of the fire.

Some 10,000 hectares of land have burned in B.C. since April, with wildfire activity concentrated in the northwest. Thanks to a wet and very cool spring, the southern part of the province has so far been spared last year’s inferno fire season, though temperatures have soared in the past 10 days and are forecast to remain very high, with little rain in sight.

The cause of the Nohomin Creek fire, which began Thursday, remains unknown.