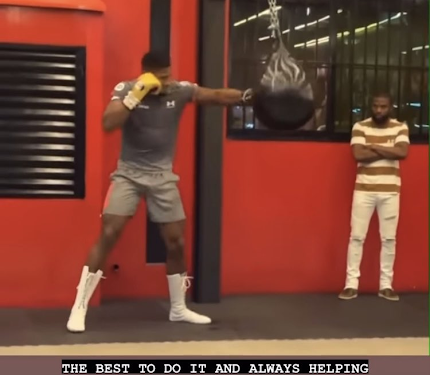 Anthony Joshua heaped praise on Floyd Mayweather for helping him prepare for his rematch with Oleksandr Usyk.

Just like the great Muhammad Ali before him, Joshua is hoping to win back the world heavyweight championship for a third time in 2022.

The Brit was conclusively beaten by Usyk when they fought in September at the Tottenham Hotspur Stadium, losing his WBA, WBO and IBF world titles as a result.

Amid speculation about what changes he may make to his coaching team, which including potentially swapping Rob McCracken for an American trainer, Joshua has now appeared to partner with former pound-for-pound king Mayweather.

The duo were pictured in a gym together on Joshua’s Instagram, with the Brit thanking the 50-0 superstar for imparting some much-needed wisdom as he honed his jab.

In the aftermath of the loss, ‘Money’ told reporters he did not see Usyk’s win as an upset simply because the Ukrainian was not as high-profile a name as Joshua.

“It was just that, Anthony Joshua was on TV,” he said. “Everybody seen him.

“Usyk was a hell of a fighter, a gold medallist if I’m not mistaken but he was behind the scenes.

“Two guys with crazy amateur backgrounds and one guy is not being seen and another guy is being seen, then we call it an upset.

“No, it’s just that he was working behind the scenes and another guy was working in front of everybody. Finally, they had to meet up and Anthony Joshua came up short.”

Mayweather has decades of experience and wisdom to impartMark Robinson/Matchroom

Mayweather was in London back in December 2020 to watch Joshua dispatch of Kubrat Pulev in dominant fashion to retain his world titles.

Now, with the belts settled firmly in Kiev, the 31-year-old AJ will need all the help of his prestigious mentor to get them back.