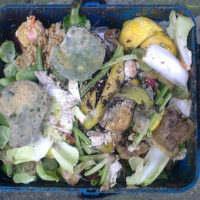 Food Cycle Science’s system for reducing the volume of food scraps going to landfill, and the time required to compost at home, is gaining quite the following from communities anxious to keep methane emissions down, and from rural residents tired of chasing bears out of compost piles, CBC News reports.

Some 20 municipalities across Canada have signed up to pilot the FoodCycler, including Nelson, British Columbia—where many of the town’s 5,500 residents compost in their backyards, much to the delight of the resident bear population. Nelson was the first municipality in Canada to team up with Food Cycle Science and has declared itself “incredibly happy” with the outcome.

More important than keeping bears out of backyards, however, is eliminating the methane produced when food waste is left to rot in anaerobic landfills, and Food Cycle Science believes its countertop devices can help meet the challenge.

CEO Bradley Crepeau said his company is currently working with remote, rural, and Indigenous communities that lack municipal composting programs. But that he eventually hopes to be “a solution, or at least part of the solution, for any municipality and community across Canada.”

Designed to fit easily on a kitchen countertop, the FoodCycler can process 2.5 litres of food waste into unfinished compost in under eight hours, without emitting methane.

CBC says the approach can save money for cash-strapped municipalities like South Glengarry, a township in eastern Ontario, where officials are happy to dodge the onerous costs of opening up yet another landfill. Noting that one of its three landfills is already at capacity, with a second slated to be capped within five years, Chief Administrative Officer Tim Mills said it costs “millions of dollars to expand landfills or to make a new one, or to close one and open up a new one. We have to look at other options, and [the FoodCycler] is one small piece of the puzzle.”