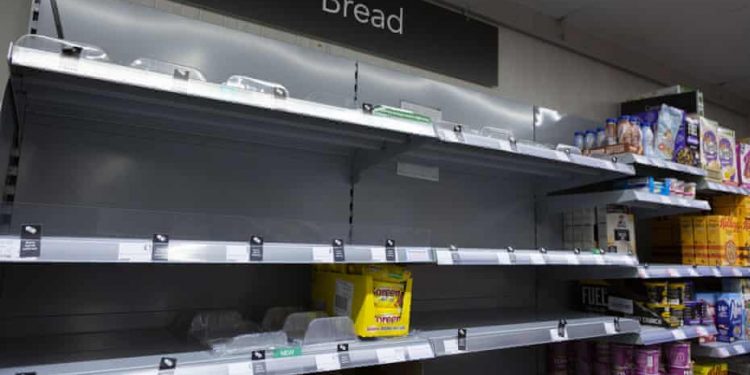 Britons are many times more likely to have experienced shortages of food and fuel than people in half a dozen EU member states, according to a poll.

Global supply chain problems prompted by the pandemic have disrupted the international trade network since the summer, with transport backlogs combining with labour shortages to create scarcities of various goods around the world.

The government has argued that the shortages are part of a worldwide pattern and no worse in the UK than elsewhere, although logistics and experts – particularly in the food sector – have said the problems are amplified in Britain by a loss of east European workers and drivers since Brexit.

In continental Europe, 0the proportion of people who said they had been personally affected was between three and nine times lower: 18% in Germany, 16% in France, 12% in Sweden, 8% in Denmark, 7% and 6% in Italy.

The proportion saying they knew people who had experienced food shortages ranged from 13% in France to 8% in Denmark and Italy – where 58% of respondents said they were not even aware that supply chain problems had led to food shortages.

The UK was also the only country where substantial numbers of people said they had experienced fuel shortages in recent weeks, since the crisis in September and October. One in three Britons (33%) said they had personally experienced a recent scarcity of fuel, compared with no more than 10% in any other country.

Only 8% of German respondents, 7% of those in France and 5% of those in Italy said they had been personally experienced fuel scarcity, with 37%, 38% and 53% respectively saying they had not even heard of the issue – compared with just 11% of respondents in Britain.