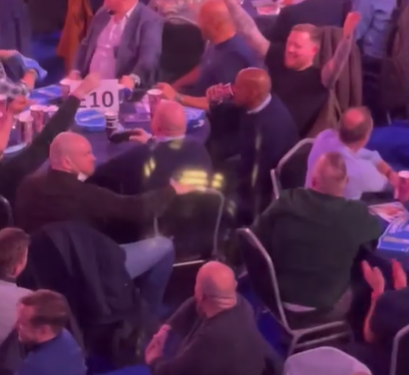 Dion Dublin may have woken up with a headache but he will go down as a legend after downing a pint at the PDC World Darts Championship.

The former Manchester United and Aston Villa striker was spotted by talkSPORT’s breakfast host Laura Woods who has also downed a drink at the tournament, even if was just tea.

The former Villa striker showed no signs of struggling to down his pintInstagram: Laura Woods

At Alexandra Palace, where the tournament is being held, the former Premier League striker was clearly having a great time and took his enjoyment up a notch by taking the drink in one go.

He might have scored 111 goals in England’s top division but arguably, nothing may never come as challenging as keeping down a whole pint.

Once finishing the drink, in extremely proud fashion, Dublin stood up and raised his hands as if he found the back of the net again.

Impressed with the feat, the fans in the arena applauded the achievement with chants of ‘Dion! Dion! Dion!’

Dublin followed in the footsteps of Woods, sort of.

She was captured by Glen Wilkie being urged by darts fans in attendance at Ally Pally to down her drink and she impressively obliged.

Being the host of the tournament on Sky Sports, Woods of course had to remain professional and revealed it was just a tea in her cup.

Nonetheless, the talkSPORT host also took to Instagram to celebrate her achievement.

“If you can’t beat them… off home for Christmas, Ally Pally you have been mega.”

What a trooperInstagram: Laura Woods

My first job: what I wished I’d known back then …