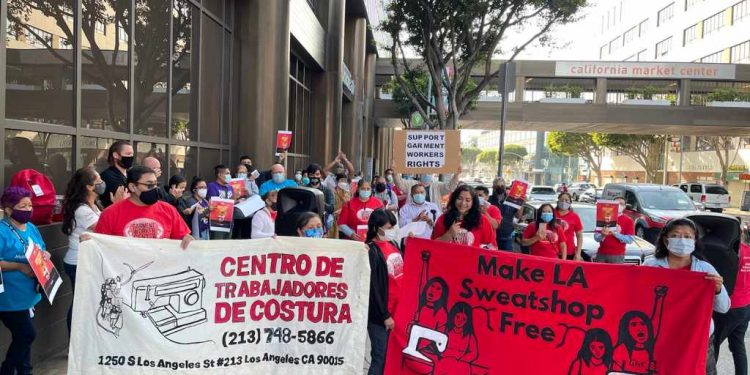 Daisy Gonzalez’s mother emigrated to California from Guatemala in the ’80s and landed a job as a garment worker. “My mother was a trimmer and an ironer. I learned how difficult this work was for her body from her experience,” Gonzalez says. Beyond the difficult conditions, the pay was equally abysmal. She recounts her mother once working for a week, and the employer paying her just $30. Her mother’s struggles opened Gonzalez’s eyes to the trenchant problem of “wage theft,” a phenomenon she says is built into the very fabric of the garment industry and its global supply chain.

“Fashion is built on colonial and racist structures,” says Ayesha Barenblat, founder and CEO of Remake, a community of women’s rights, ethical fashion, and environmental advocates on a mission to shift the industry’s deleterious practices that harm workers and the planet. For Barenblat, the long legacy of abuse by brands is inherently a feminist issue whose solutions must center justice. “If you care about women’s rights and environmental justice, then you must care about how the fashion industry operates,” she says.

In 2013, the collapse of the Rana Plaza building on the outskirts of Dhaka, the capital of Bangladesh, captured global headlines. The eight-story building housed shops and garment factories that produced clothing for major brands in the U.S. and Europe. With a staggering death count of more than 1,130 garment workers, its collapse became the deadliest garment industry accident in modern times.

“Rana Plaza was not an accident. This was corporate murder,” said Nazma Akter, a former child garment worker who has since become an internationally acclaimed trade unionist and founder of Awaj Foundation, a group fighting for the rights of Bangladeshi workers in the apparel supply chain.

Unfortunately, Rana Plaza wasn’t an anomaly. Around the world, garment workers—most of them women, and in some instances girls—have died or have been left disabled by a spate of disasters. Just a year prior, Ali Enterprises in Karachi, Pakistan, burned down, killing more than 250 garment workers. H&M, ZARA, and Tommy Hilfiger, among others, have sourced from factories that have seen avoidable fatalities of garment workers due to negligence and willful complicity.

“How many people will die for fashion, for cheap clothes that end up in the landfill anyway?” Barenblat asks. “It is depleting and violent to women’s bodies and the environment.”

The Garment Worker Protection Act will hold fashion brands and supply chains accountable for stolen wages and will outlaw the per-piece system, making way for a real minimum wage for workers. Photo by Keri Oberly.

A Victory in California

With its global tentacles of supply chain impacting workers from Dhaka to Karachi to Los Angeles, Gonzalez says the fashion industry is predicated on harm and stolen wages. But the trillion-dollar industry and the dark shadow of its operations may soon have a reckoning.

Within the U.S., Los Angeles County is the biggest fashion manufacturing hub, where nearly 60% of garment workers are women, a majority of them Latino, followed by Asians.

A key tool for wage theft in the fashion industry is the piece-rate system, by which employers pay workers per unit of production instead of an hourly rate or a salary. While the U.S. Department of Labor espouses federal minimum wage for all hours worked for piece-rate payments as well, there are no enforceable mechanisms to guarantee this. In Los Angeles, some garment workers reported earning as low as $2.68 an hour.

Outraged by these brazen inequities impacting countless women of color, Gonzalez is now a lead member-organizer with the Garment Worker Center, a worker rights organization leading an anti-sweatshop movement to strengthen the rights of garment workers in Los Angeles. Members of GWC have fought arduous struggles against the wage theft, exploitation, and dehumanization carried out by an industry that has cashed in on the invisible labor of largely immigrant women of color. GWC was also the driving force behind SB 62, the Garment Worker Protection Act, a seminal bill the group championed in an effort to transform the lives of more than 45,000 garment workers in California.

In September, GWC members were euphoric when the bill was passed and signed into law by Gov. Gavin Newsom. This law will now hold fashion brands and supply chains accountable for stolen wages and will outlaw the per-piece system, making way for a real minimum wage for workers. It also creates an important precedent.

“This bill is a first-of-its-kind win in America, and a lot of nonprofits and workers groups took note of this incredible victory,” says Marissa Nuncio, director of GWC. “Garment workers have been exploited and failed by the system for far too long, and because of the tireless organizing efforts of those workers, the industry will become something California can be proud of.”

Nazma Akter (on microphone) is a former child garment worker who is today an internationally acclaimed trade unionist and founder of Awaj Foundation, a group fighting for the rights of Bangladeshi workers in the apparel supply chain. Photo courtesy of Awaj Foundation.

A Laborious Road to Justice

Nuncio advocates as an attorney and organizer at the intersection of labor, immigrant rights, and community organizing. A proud Chicana, she saw the devastating impact of the North American Free Trade Agreement on workers and farmers, and she represented unions, car wash workers, farmworkers, and day laborers. “The planning for SB 62 began earnestly in 2018. We focused a lot on relationship-building, getting workers trained and ready to lead the campaign. We introduced the bill early last year, then as SB 1399, but the clock ran out on us,” she says.

Undaunted by the setback, the GWC team got back to work and reintroduced the bill in 2021. The stakes were high: Members were already seeing the devastating impact of COVID-19 on garment workers as infections spread in poorly ventilated factories with little room for social distancing. The crisis was both about health and livelihoods.

“COVID has brought to life what was hidden under the seam: poor wages. There were times I would come out crying with depression. You kill yourself working … you leave very tired,” says Ana de los Rios, a member of GWC. Teresa Garcia, another member, says, “We don’t get paid sick days. We don’t get vacations.”

As COVID-19 exacerbated inequities around the world in 2020 and 2021, garment workers began to experience catastrophic economic consequences on a global scale. Dozens of brands refused to pay for clothing orders amounting to billions of dollars, leaving garment workers, many of them making poverty wages, without pay for their countless hours of strenuous labor.

In the spring of 2020, Remake launched the #PayUp campaign with support from GWC. “This was the biggest fashion heist,” Barenblat says. “Garment workers are living paycheck to paycheck, and we had to make sure brands were honoring contracts at the height of the pandemic.” Remake launched a brand tracker and an online petition that generated more than 270,000 signatures. Nearly $15 billion of the estimated $40 billion in canceled orders owed to garment workers was recovered from Gap, Levi’s, and other brands.

A year later, as abysmally low wages and debt continued to impact the livelihoods and food security of garment workers, #PayHer became a rallying hashtag on social media. Models, sustainable fashion influencers, and actresses, such as Amber Valletta and Nathalie Kelley, galvanized their followers to support the campaign for $5 billion still owed to workers in stolen wages and severance, and they demanded brands pay garment workers a livable wage. Remake also threw down its support for SB 62, garnering support from ethical businesses and mobilizing its community of conscious consumers to support the advocacy of GWC on social media.

At the same time, though, the California Chamber of Commerce doubled down on its opposition, slamming SB 62 as a “job killer.” The bill also raised the hackles of the American Apparel & Footwear Association, which said it would “impose unprecedented joint liability on businesses with no control over garment workers.” Nuncio believes these fashion associations are the “old guard” and fail to represent the future trajectory of the industry. Instead, GWC and its allies invested in critical relationship-building with ethical and conscious brands and consumers who care about women’s and labor rights. She thinks this is the direction the industry should be headed.

“Garment workers are unmasking the hegemony and building class consciousness and unity,” says Kitzia Esteva-Martinez, a grassroots feminisms national organizer at the Grassroots Global Justice Alliance. “They are also confronting the historical legacy of patriarchy and racial exploitation of workers. The [Garment Worker Protection] Act will have ripple effects.”

As abysmally low wages and debt continued to impact the livelihoods and food security of garment workers during a pandemic, #PayHer became a rallying hashtag on social media to pressure brands to pay garment workers a livable wage. Photo courtesy of Remake.

“This bill was bold, historic, and deeply important for garment workers across the world, as well as people that advocate for them,” Nuncio says. “We took on big-money fashion brands to demand that they were accountable for abuse instead of being allowed to hide behind subcontractors.” According to the Clean Clothes Campaign, a European-based alliance for the rights of garment workers, the subcontracting agreements typical of garment workers are layers deep: “Workers don’t get a regular contract but a series of short-term contracts or not even that. Forced overtime is common.”

This game-changing victory of the protection act is energizing labor groups in the U.S. and overseas, and members say this is just the beginning. “The national and international attention we have been getting will absolutely help shine a spotlight on the organizing efforts of other organizations here and abroad, and the connections will only help to strengthen implementation of the law,” Nuncio says. “We’ve already had outreach from international garment worker campaigns and other labor groups in America asking us if we can talk more about our strategy, or if we could partner with them on their projects.”

Labor rights activists and networks from around the world are sharing strategies and collaborating to build pressure on brands for transparency and accountability. “We are already driving conversations with labor groups in other countries on the implications of SB 62 and the mandatory human rights due diligence efforts in Europe,” Barenblat says. “I hope this harkens a new era of sharpening the focus on brands’ commercial practices, unfair contracts, and downward pressure on prices, which is the root cause for poverty wages and sweatshop conditions.”

In more good news, after mounting international pressure on brands from labor rights groups and ethical business advocates like the Awaj Foundation and Remake, the Accord on Fire and Building Safety in Bangladesh was renewed and expanded in August 2021. The new agreement continues the legally binding commitments for workplace safety in Bangladesh and will expand the program to other countries.

Garment Worker Center and allies are discerning a slow and palpable shift in which ethical consumers are more conscious about what they open their wallets for. Barenblat notes an increase in conversations about degrowth, circular fashion, and increasing the life cycle of garments.

Nuncio hopes this growing interest will translate into direct action to upend the inequities of the current fashion industry. “Since more people have heard these stories, they’ll be more in tune to the organizing efforts and direct actions that garment workers and ethical fashion advocates create, and they’ll put pressure on the brands themselves.”

The Rashists from Mordor vs. the Tractor Troops: Ukraine’s new language of war