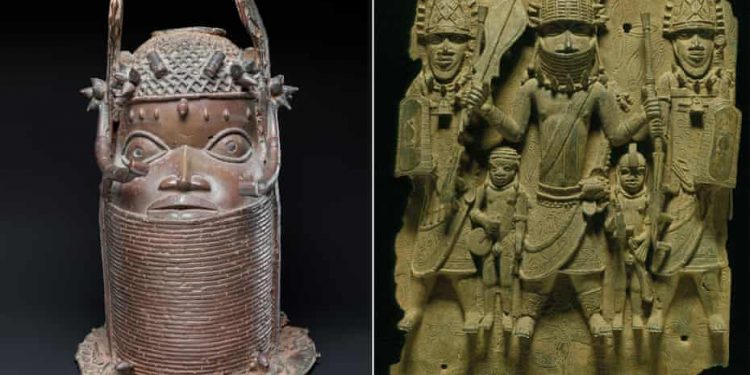 Germany is physically handing over two Benin bronzes and putting more than 1,000 other items from its museums’ collections into the ownership of Nigeria, more than a century after they were looted by British soldiers from the once powerful kingdom in west Africa.

The German foreign minister, Annalena Baerbock, and the culture minister, Claudia Roth, will sign a restitution agreement with their Nigerian counterparts, Zubairu Dada and Lai Mohammed, in Berlin on Friday afternoon.

The museums and the Nigerian government will then negotiate the physical return of the individual objects, some of which could remain on display in Germany under custodial agreements.

“The return is a milestone in the process of reappraising colonial injustice in the field of museum collections,” said Hermann Parzinger, the head of the Prussian Cultural Heritage Foundation, an authority that oversees many of Berlin’s museums. “By completely transferring property of all our Benin artefacts to Nigeria, we are taking a significant step.”

He said a “representative collection of objects” would remain in the German capital on a long-term loan.

Two Benin bronzes – the head of an oba, or king, in ceremonial attire from the 18th century and an expressive 16th-century relief depicting an oba accompanied by guards or companions – were to be handed over to the Nigerian government on Friday afternoon and travel back to west Africa with the delegation.

The bronzes, looted by British soldiers and sailors on a punitive expedition to Benin City in 1897, were auctioned off to European and North American museums at the start of the 20th century, with Germany securing the second largest collection in the world.

The two bronzes handed over in Berlin on Friday, picked as representative of the artefacts’ typical style, were bought from the British by Eduard Schmidt, a German diplomat and employee of the Woermann Linie shipping company, who later sold them to a Berlin museum.

From Britain, two Benin bronzes have so far been returned to Nigeria, on the initiative of universities that held them – a cockerel sculpture by Jesus College, Cambridge, and the head of an oba by Aberdeen University.

The British Museum, which holds the world’s largest collection of Benin bronzes, has refused to give up its 900 objects, arguing it is prevented from permanently returning items by the British Museum Act of 1963 and the Heritage Act of 1983.

The Healthcare Triage Podcast: How We Solve the Reproducibility Crisis – Incentives in Academia