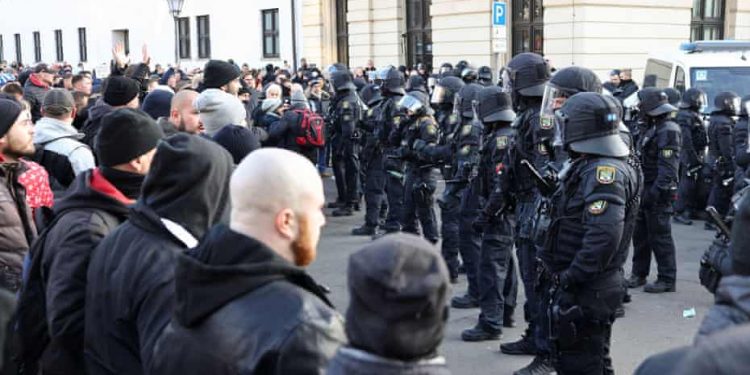 Germany has reported a record number of daily coronavirus cases as the Omicron variant increases its spread.

The Robert Koch Institute, the country’s national disease control agency, said on Wednesday it had registered 80,430 new cases, where the previous record had been just over 65,000 in mid-November. It said that 384 people had died in the previous 24 hours bringing the death toll from coronavirus in Europe’s most populous country to around 115,000.

As health officials and policy makers seek ways to keep this latest wave under control, given the infectiousness of the Omicron variant which is now dominating in parts of the country, they remain cautiously optimistic that the relatively low hospitalisation rate and tightening of protection measures will contribute to managing the virus over the coming weeks.

Concern is focused on ensuring the most vulnerable are vaccinated, and that all adults have access to a third booster shot, as well as on keeping up vital facilities such as hospitals and rubbish collection amid a rise in sickness levels across the workforce.

A vaccine mandate – so-called Impfpflicht – is being hotly discussed across the political parties. A Bundestag debate on the subject is scheduled for two weeks’ time, and a law could be in place by March, leading MPs have said. Among suggested variations are a regulation which would be limited to a year, or one that would target only those over the age of 50.

The country’s president, Frank-Walter Steinmeier, said due to differing opinions on the issue, and the fact that many who had previously rejected the idea of an obligatory vaccine were now in favour of it, a “thorough debate” was necessary. He told a group of citizens at a discussion event that people who claimed Germany was controlled by a “coronavirus dictatorship” were “showing contempt for democracy and its constitutional institutions”. He added: “This is simply vicious nonsense.”

Whilst leading government figures such as chancellor Olaf Scholz and the health minister, Karl Lauterbach, have made public their support for a mandate, the government has said a vote on the issue would not be government-led, in order to ensure as wide a consensus as possible.

With a growth in the number and regularity of protests across the country against coronavirus protection measures in recent weeks, as well as death threats faced by politicians, there is an acute awareness of the need to keep the majority of the public on board. Most Germans have said in polls that they are in favour of a vaccine mandate.

As of Tuesday, 72.2% of all Germans had been double jabbed, and 51.4% of adults had received the recommended booster jab. The government’s goal is for 80% of the population to have been vaccinated by the end of this month. Scholz has said he would later aim for 90%.

Lauterbach, the health minister, announced on Wednesday that Germany now had enough stocks to give every German three more jabs, having procured an extra five million doses from fellow EU partner Romania, which has been unable to administer them.

Some vaccine sceptics have said they might be persuaded to be vaccinated once Novavax, a vaccine referred to as a “dead” vaccine because it contains the spike proteins which cover the virus’ surface, becomes available, possibly later this month. The hope is that this will help to boost vaccine take-up.

Tightened protection measures were introduced on Tuesday across Germany, particularly in restaurants and hotels. Referred to as 2G+, they namely require people to show proof they have been double-vaccinated, or have recovered within the last six months, and have either received a booster shot or have an official negative test result.

These rules have been extended to the Bundestag, requiring MPs who are not vaccinated and have no medical exemption, to sit in the public gallery above the plenary hall, as long as they have an official negative test result. In addition they must now wear medical FFP2 masks. Thinner, typically blue medical masks widely used until now are no longer allowed. The rules will be in place until 28 February.

Both the far-right populist AfD and members of the far-left Die Linke have threatened to take legal steps against the move. Alice Weidel, leader of the AfD parliamentary group who was unvaccinated but has recovered from coronavirus, accused the government of “shrinking MPs’ mandates”.

She received unlikely support from Sahra Wagenknecht of Die Linke, who told Redaktionsnetzwerk Deutschland in an interview: “To lock unvaccinated MPs out of the plenary hall rather than requiring everyone to take a tests, is epidemiologically nonsensical and quite clearly unconstitutional, owing to the lack of protection vaccines give against infection and transmission.”

The video platform YouTube has meanwhile confirmed reports that it had blocked the anti-coronavirus measures lobby group #allesaufdentisch, (lay it on the table) key supporters of which include leading figures from the German cultural world, from uploading videos for several days after it was accused of spreading falsehoods about the virus. One of the videos posted by the group falsely claimed that the coronavirus vaccine had led to 13,000 deaths, and compared the virus to a light cold. A YouTube spokesman confirmed to Spiegel that the video had “contravened our medical misinformation policy”.

With increasing numbers of Germans now working from home once again, the labour minister Hubertus Heil announced on Wednesday that in future employers would be obliged by law to allow employees to work from home as long as this was compatible with their jobs.