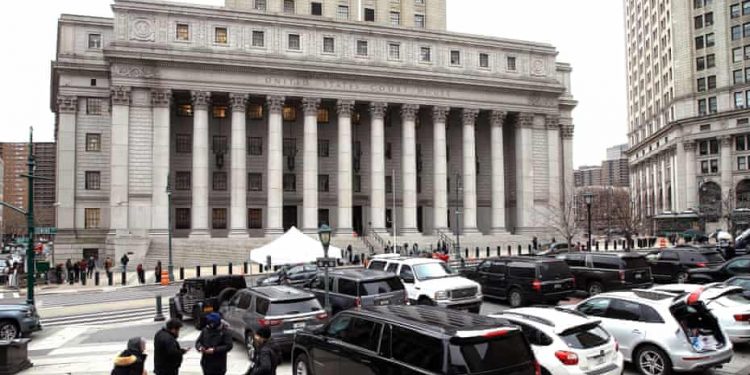 As jury deliberations in Ghislaine Maxwell’s sex-trafficking trial resumed in federal court in Manhattan on Tuesday, the judge told lawyers jurors should prepare to deliberate later in the day – because the surge in Covid-19 cases threatens to derail proceedings.

“We now face a high and escalating risk that jurors and trial participants may need to quarantine,” Judge Alison Nathan said, “thus disrupting trial, putting at risk our ability to complete this trial.”

The surge in cases stoked by the Omicron virus variant is being felt across the US. One expert told the New York Times on Monday: “All 50 states are in the soup at the same time. It’s like every state is being hit by a viral hurricane.”

New York has been hit particularly hard. In court in downtown Manhattan, Nathan told attorneys: “We are seeing an astronomical spike in the number of Covid-positive cases in New York City over the last one to two weeks due to the Omicron variant.

“We are very simply at a different place regarding the pandemic than we were only one week ago.”

Nathan’s comments about Omicron’s looming threat were meant to give context to statements she made to jurors on Monday afternoon. Then, Nathan told the men and women of the jury they should be prepared to stay until at least 6pm each day, until they reach a verdict.

On Tuesday morning, she told attorneys: “In light of the variant, my concern about interruption of trial, given increasing daily risk of exposure, to either a juror or trial participant, requiring quarantine, it is time to have the jurors make plans to continue deliberating until a verdict is reached.”

During jury selection, Nathan said she would not exclude prospective panelists based on vaccination status. One juror ultimately selected to serve said in court she was not currently enrolled in graduate school “because of the vaccination status requirement”.

The trial commenced in earnest on 29 November. Maxwell, who turned 60 on Christmas Day, faces six counts relating to alleged involvement in her ex-boyfriend Jeffrey Epstein’s sexual abuse of girls, some as young as 14.

She has pleaded not guilty.

Epstein, a financier and convicted sex offender with high-profile associates including Prince Andrew, Bill Clinton and Donald Trump, was arrested in July 2019 for sex trafficking minor teens. He killed himself in a New York City federal jail about a month after his arrest, while awaiting trial.

Jurors started deliberating late on 20 December. They did not attend court on 23 or 24 December, due to the Christmas holiday.

They have asked to see testimony from Maxwell’s accusers and several witnesses who appeared to corroborate their accounts.

On Monday, jurors requested to see a transcript of testimony from Matt, the ex-boyfriend of Jane, the first Maxwell accuser to testify.

Jurors also asked to see a transcript of testimony by a former Palm Beach police officer, Gregory Parkinson, who in October 2005 led a search of Epstein’s property in the Florida resort.

In testimony, Parkinson talked jurors through a video of the search and responded to questions about still images that appeared on screen. After Parkinson noted the presence of a “portable, collapsible massage table”, a detective brought a massage table into the courtroom.

Parkinson got down from the witness stand and, with gloved hands, examined the table. Prosecutors asked him to describe what he saw.

“The table itself in an open position,” Parkinson said.

Jurors also requested to see the transcript of testimony from David Rodgers, one of Epstein’s pilots.