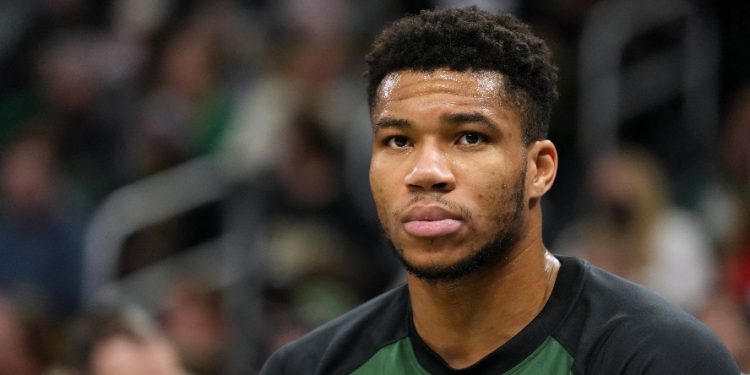 It’s been a few games since Giannis Antetokounmpo played in a basketball game. The reigning NBA Finals MVP missed the Milwaukee Bucks‘ last five games because of the NBA’s health and safety protocols, and while there were questions about whether or not he’d be able to take the floor on Christmas Day, Antetokounmpo got cleared in time to suit up against the Boston Celtics.

As a result, Christmas was a pretty good day for the fine folks in the Cream City. Despite going into the locker room at halftime down by 15 points, Milwaukee was able to pick up a 117-113 win, thanks in large part to an MVP-caliber performance by the big fella. Antetokounmpo went for 36 points in 30 minutes of work on 13-for-23 shooting. Never one to leave other columns in the box score empty, Antetokounmpo pitched in 12 rebounds, five assists, and two blocks for good measure.

Giannis euros into the dime…Bobby Portis for

Giannis STUFFS it to end the 3Q

You need to get to ABC and watch these two stars down the stretch.

Perhaps his best moment came in the game’s waning moments, when it looked like Antetokounmpo was going to meet Jayson Tatum at the summit and block an attempted dunk. Tatum, realizing there was a very tall person standing right next to him, decided to dump the ball off to Robert Williams, who had a clear path to the basket to cut the Bucks’ lead to one.

Instead, Antetokounmpo reacted quickly, jumped with Williams, and blocked him. The ball ended up bouncing off of Tatum’s hand and led to the Bucks picking up a win.

GIANNIS ROTATES OVER FOR THE BLOCK.

Milwaukee’s season, up to this point, has been defined by the team’s inability to keep their core players on the floor together for extended periods of time, as bouts with COVID and injuries have not been kind to the defending champions. But if they’re healthy and have Antetokounmpo doing what he does best, they’re going to have something to say in the race to win the Eastern Conference. Perhaps this will include doing the Cha-Cha Slide a few times along the way.

Czech NGOs stand up to populists: Elsewhere in emerging Europe