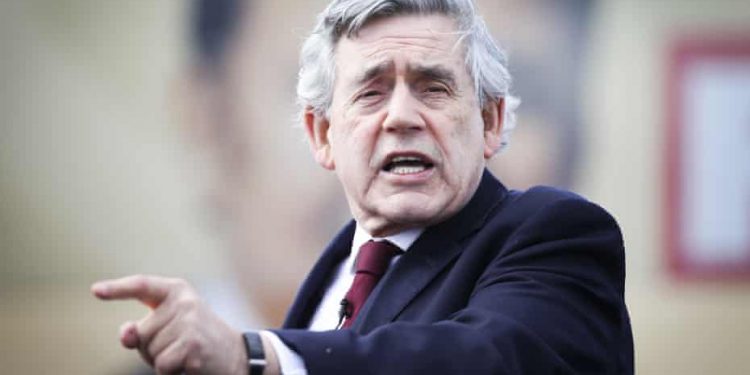 The west is “sleepwalking into the biggest humanitarian crisis of our times” in Afghanistan, Gordon Brown has warned, as he called for a support package to save the country from economic and social collapse after the Taliban’s takeover.

Four months after the western-backed government was overthrown following a mass military withdrawal, the former UK prime minister said the case for action was not just based on morals but also “in our self-interest”.

He said more than half the Afghan population was facing extreme hunger, including 1 million children at risk of starving to death, citing International Monetary Fund predictions that the country’s economy will contract by 20 to 30% in the next year.

“No country in recent times is suffering from such ‘universal poverty’ in the way that Afghanistan may do,” Brown wrote in an article for the Times.

“It is ironic that when the whole international community is pledged to achieve the sustainable development goals – to free all the world from absolute poverty this decade – almost every citizen of Afghanistan will be condemned to that dire fate.

Brown stressed the effects may be felt within Europe, given thousands of Afghans will be faced with the choice of starving or emigrating.

About $4.5bn (£3.3bn) should be pledged by countries to the UN Office for the Coordination of Humanitarian Affairs, Brown urged, adding the “largest humanitarian response ever agreed for a single nation” was required.

He continued: “It cost America trillions to fight the war in Afghanistan. It is not beyond our capacity to find $4bn to prevent starvation amid this uneasy peace.

“This tragedy foretold cannot be a tragedy unresolved.”

Brown also said the frantic military retreat from Afghanistan, when tens of thousands of people tried to flee on evacuation flights before the final soldiers pulled out, signalled the end of the notion allies could “impose liberal western values overnight” in other countries.

However, speaking on BBC Radio 4’s Today programme, he cautioned: “What it cannot do is remove the obligation on each of us to understand that we are in an integrated and interconnected world where we are all affected by decisions that are made in other countries and we have got to do something to help those, particularly those who face starvation.

“Otherwise, not just for moral reasons but for self-interested reasons, this will come back to haunt us.”

According to the Disasters Emergency Committee, 8 million people are on the brink of famine in Afghanistan, while 95% of the entire population does not have enough food to eat.

The situation has been compounded by the Covid pandemic and the worst drought in 27 years – and is expected to get worse through the winter as temperatures drop.

Prince Charles, who is a patron of the International Rescue Committee UK, recently urged people to donate to its fundraiser, calling the situation in Afghanistan “truly catastrophic”.

Damning new light was shed on the UK’s handling of its withdrawal from Afghanistan earlier this month, when a Foreign Office whistleblower who helped sort requests for evacuation revealed the chaos and confusion at the heart of the operation.

He said the government falsely claimed each request was logged, prioritisations were made with little consistency or checks and there was a lack of staff, experience and equipment.