‘Grateful’: Novak Djokovic thanks judge and takes to tennis court after release 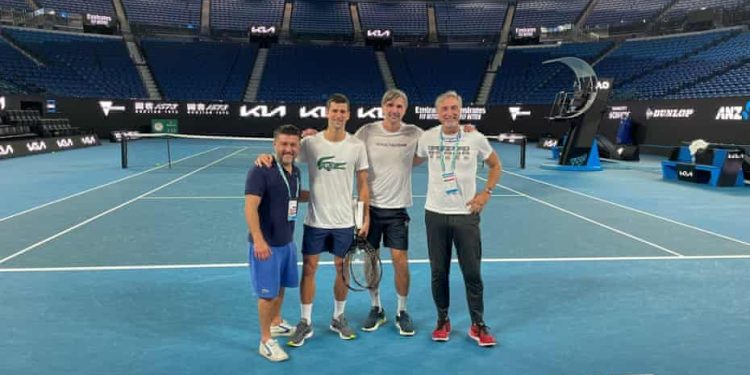 Novak Djokovic thanked his supporters for standing by him as he hailed his successful appeal against the cancellation of his visa by the Australian authorities.

“I’m pleased and grateful that the judge overturned my visa cancellation. Despite all that has happened, I want to stay and try to compete @AustralianOpen,” Djokovic tweeted as his family gave a press conference.

“I remain focused on that. I flew here to play at one of the most important events we have in front of the amazing fans. “For now I cannot say more but THANK YOU all for standing with me through all this and encouraging me to stay strong.”

Djokovic’s returned to the practice court on Monday night after his court victory.

On Monday Judge Anthony Kelly quashed the visa cancellation and ordered the Australian government to pay legal costs and release the Serbian from detention within half an hour. But Djokovic could still be deported. The immigration minister Alex Hawke said that he was considering using his personal power to again revoke Djokovic’s visa.

At a press conference in Belgrade Djokovic’s mother Dijana claimed the Australian Open champion was “subjected to torture and harassment” in detention in Melbourne. “This is his biggest win in his career, it is bigger than any grand slam,” she said.

Djokovic’s father Srdjan said: “Over the past few days, it’s been very, very difficult for everyone in the world who is free thinking. But he is mentally extremely, extremely strong. They took away all his rights his rights, as a human being. He refused to revoke his visa. They gave him no right to prepare his defence for several hours, and they took away his phone. Fortunately they gave him back his phone. He contacted his legal team who mounted a fantastic defence, that they could not match.

“This is a huge win for Novak, his family and the free world. He respected everything that was asked of him. He only wanted to go there to play tennis and that right he wanted to take away from them. Justice and the rule of law have prevailed. The judge who presided over the case has shown that not for second was Novak the guilty party. The judge was fantastic, he simply respected the facts. He took the only decision that was possible which was to release Novak.”

Djordje Djokovic said his brother had gone immediately back to the tennis court to renew training as he pursues a 10th Australian Open title. “Novak is free … he came to Australia to play tennis, to try and win another Australian Open.”